Showing posts from November, 2018
Show all

The subtitle of Alfred Russel Wallace 's book " The Malay Archipelago " - " The Land of the Orangutan, and the Birds of Paradise " - gives a strong hint as to the central goals of his journeys. Magnificent bird of paradise ( Diphyllodes magnificus )   I have enjoyed following (during 2017 and 2018) in the footsteps of Wallace's 1854-1862 excursions in the region. Encounters with wild orangutans in Sumatra , Sabah and Sarawak have been memorable. The birds of paradise were less easily within reach though. This October 2018, guided by Stewart McPherson , we travelled to Papua New Guinea to see what we could see. It's a journey well worth the effort. Wallace's book (which I read again on the Air Niugini flight out) contains some highly enticing quotes: April 1858, " I looked with intense interest on those rugged mountains, retreating ridge behind ridge interior, where the foot of civilized man had never trod. There was the  country
1 comment
Read more 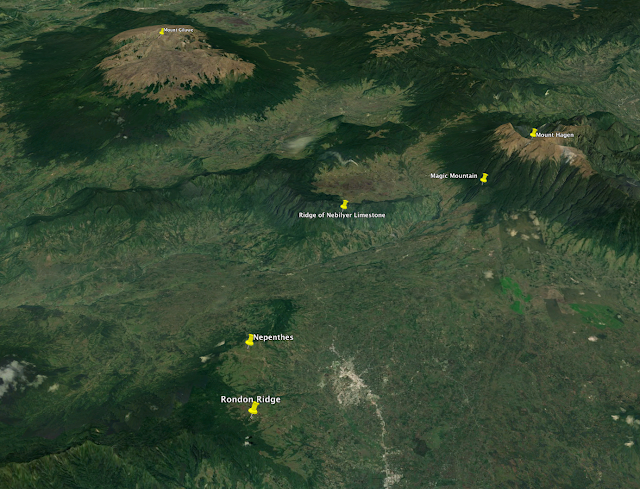 On a recent journey to Papua New Guinea (guided by Stewart McPherson ), we came across just a single example of the carnivorous pitcher plant Nepenthes . The focus of the journey had been on birds of paradise, orchids and human cultures, but this was one of several other interesting plants we met with. Apparently they are very much more abundant to the west in Irian Jaya. I am more familiar with Nepenthes on Borneo, my favourite being Nepenthes ampullaria and its associated tiny narrowmouth frogs . The plant was  a Nepenthes maxima , the great pitcher plant , growing on a raised area next to a stream at an elevation of 1945 m in an area south of Mount Hagen, not far from Rondon Ridge. Mount Giluwe  (4367 m) lies to the west behind a ridge of Nebilyer limestone (see image below). The Nepenthes location in the upper Wahgi Valley near Mount Hagen (North is to the right) We scrambled through the dense vegetation to reach the plant and then released Stewart to talk on his fav
Post a Comment
Read more
More posts