Showing posts from March, 2019
Show all

The story of first contact in 1933 with the peoples of the central Wahgi Valley in the Papuan highlands is a remarkable one. An unsuspected group of thriving stone-age cultures came to the attention of the outside world when the Leahy brothers first flew over the area and later reached it on foot. Tribal men carried elaborate stone axes and this contact with extant stone-age cultures provided fascinating insights on how their stone tools, such as axes and adzes were hafted. The available evidence was collated in Burton's (1984) Thesis at the Australia National University, on "AXE MAKERS OF THE WAHGI: Pre-colonial industrialists of the Papua New Guinea highlands." I saw a number of these old axes during a visit to the highlands near Mount Hagen in October 2018 (see the Paiya chief photograph below). The area of that journey is shown in the google Earth image shown below. The upper Wahgi River valley with locations of Paiya Village, Mount Giluwe and Mount Hagen t
Post a Comment
Read more 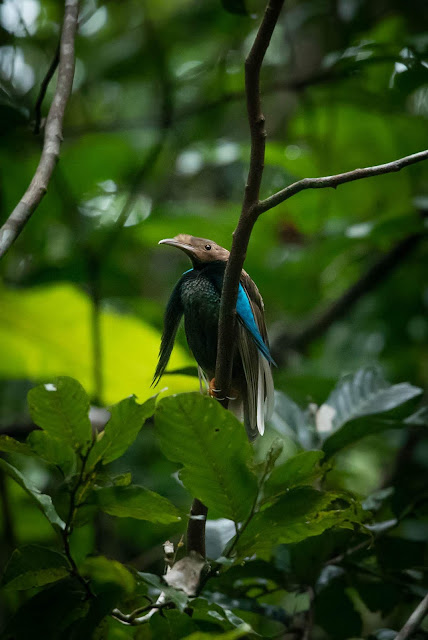 This, ladies and gentlemen, is a Wallace's standardwing bird of paradise, named for Alfred Russel Wallace in 1859 by G.R. Gray, " for the indefatigable energy he has hitherto shown in the advancement of ornithological and entomological knowledge, by visiting localities rarely if ever travelled by naturalists ." Standardwing ( Semioptera wallacii halmaherae Salvadori 1881), Saturday 9th March 2019, Weda, Halmahera Alfred Wallace , co-discoverer of the Wallace-Darwin theory of evolution by natural selection, had a particular fascination with the birds of paradise, but, " Five voyages to different parts of the district they inhabit, each occupying in its preparation and execution the larger part of a year, produced only five species out of the fourteen known to exist in the New Guinea district. " On a visit to Batchian Island (Bacan these days), however, there was a great treasure awaiting. When his assistant Ali one day brought him a " curious
Post a Comment
Read more
More posts