November 22, 2018
The subtitle of Alfred Russel Wallace's book "The Malay Archipelago" - "The Land of the Orangutan, and the Birds of Paradise" - gives a strong hint as to the central goals of his journeys.


I have enjoyed following (during 2017 and 2018) in the footsteps of Wallace's 1854-1862 excursions in the region. Encounters with wild orangutans in Sumatra, Sabah and Sarawak have been memorable. The birds of paradise were less easily within reach though. This October 2018, guided by Stewart McPherson, we travelled to Papua New Guinea to see what we could see. It's a journey well worth the effort.

Wallace's book (which I read again on the Air Niugini flight out) contains some highly enticing quotes:

April 1858, "I looked with intense interest on those rugged mountains, retreating ridge behind ridge interior, where the foot of civilized man had never trod. There was the  country of the cassowary, and the tree-kangaroo, and those dark forests produced the most extraordinary and the most beautiful of the feathered inhabitants of the earth - the varied species of birds of paradise."

In a discussion of biogeography, Wallace notes that, "the 100-fathom line round New Guinea marks out accurately the range of the true Paradise birds."

He dedicates his Chapter XXXVIII to the birds of paradise, writing:

"As many of my journeys were made with the express object of obtaining specimens of the Birds of Paradise, and learning something of their habits and distribution; and being (as far as I am aware) the only Englishman who has seen these wonderful birds in their native forests, and obtained specimens of many of them, I propose to give here, in a condensed form, the results of my observations and enquiries."

Our own first encounter with a bird of paradise was on the flanks of Mount Hagen, on our very first evening in the Highlands (3rd October). It was a male Stephanie's Astrapia (Astrapia stephaniae), with difficult-to-believe long flaring black tail feathers. The following Saturday (6th October) we saw Stephanie's again, initially as silhouettes in the early morning mist as we hiked up to a ridge in the Rondon Ridge area, south of Mount Hagen, and later more clearly, with the blue throat becoming visible. 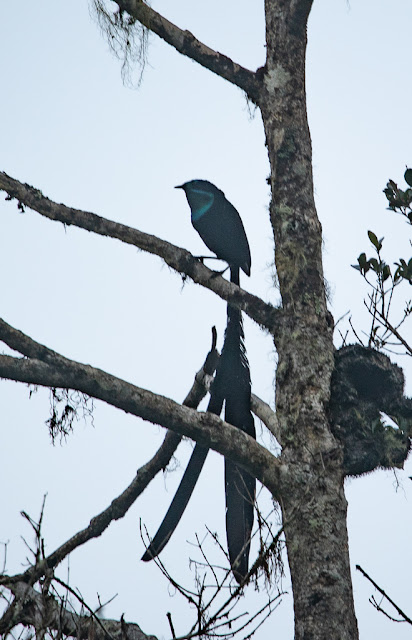 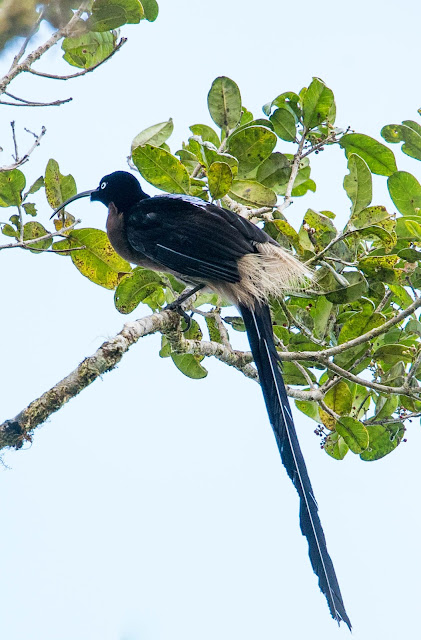 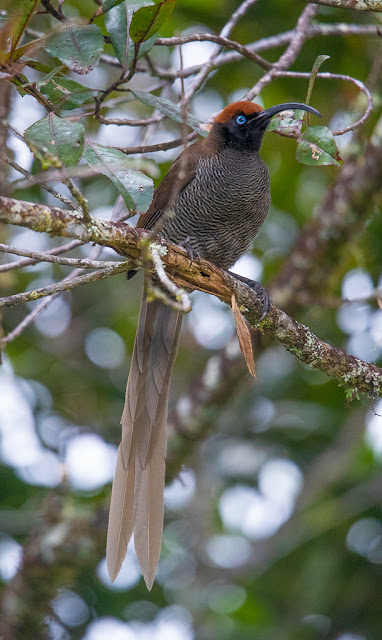 The King of Saxony put on some dramatic displays, at one point including some enthusiastic bounces on his flexible display branch. 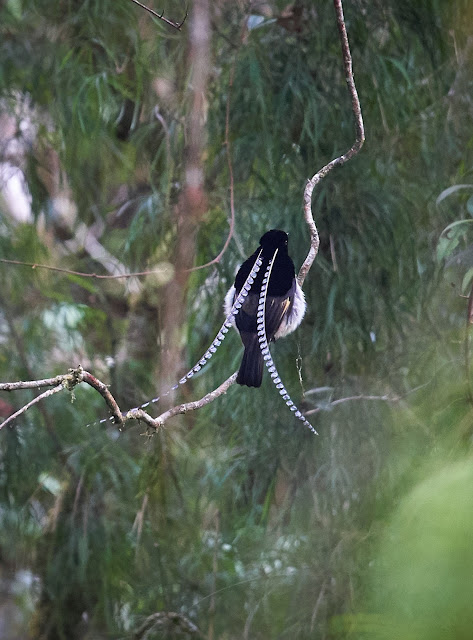 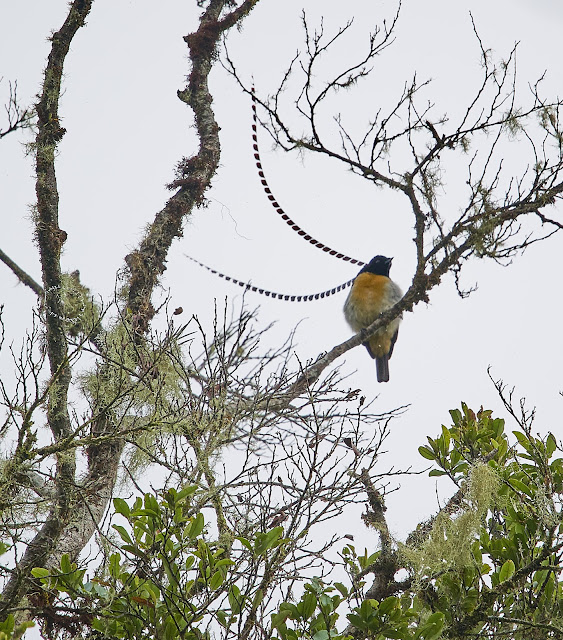 
That afternoon, we visited Kumul Lodge where a variety of birds can be observed at a feeding station. I preferred a hike through the forest, which produced some fine views of the astonishing ribbon-tailed astrepia and several other birds (crested berrypecker, Brehm's tiger parrot, mountain firetail, regent whistler, mountain mouse-warbler, Belford's melidectes, common smokey honeyeaters and more). 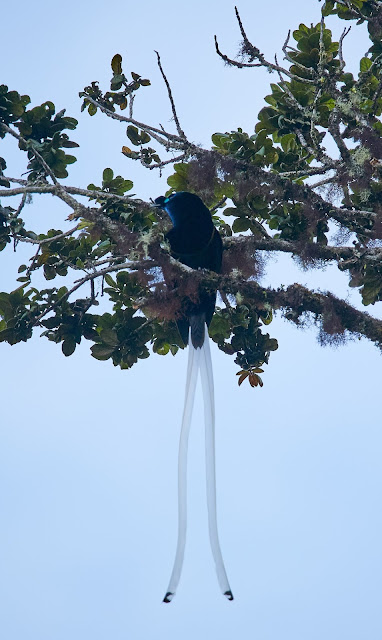 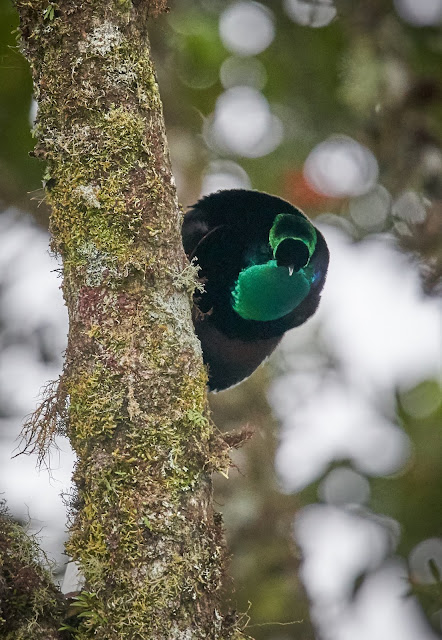 
On Sunday 7th October we visited a Raggiana bird of paradise (Paradisaea raggiana) display area north of Mount Hagen and were rewarded with the full performance by a single male and several females. Incredibly friendly locals here gifted us four delicious pineapples. We had closer views of this species a week later at the Varirata National Park. 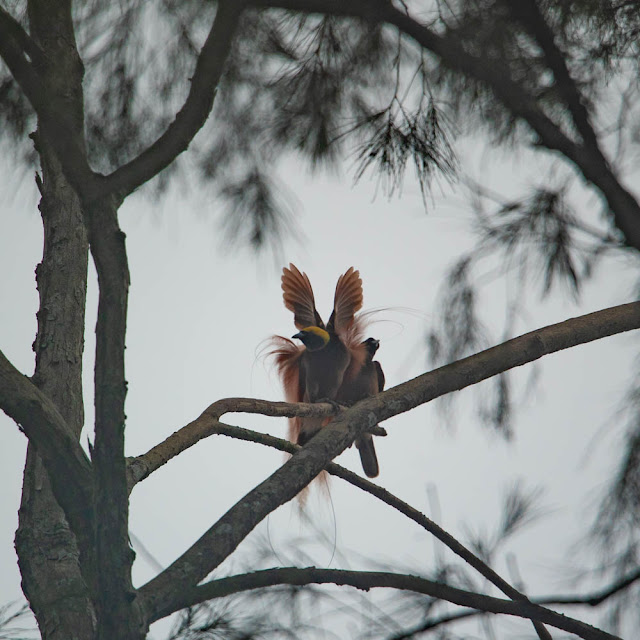 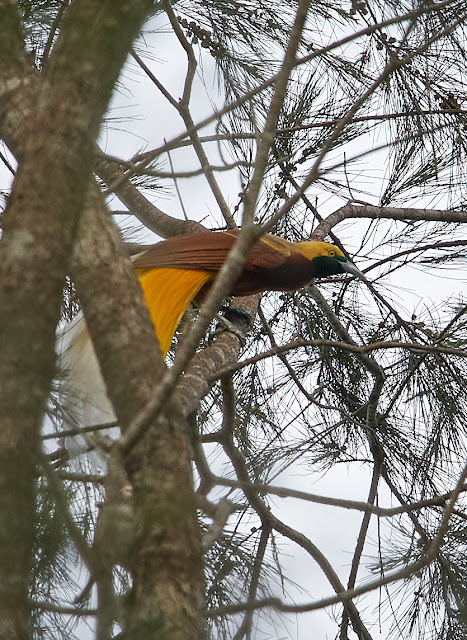 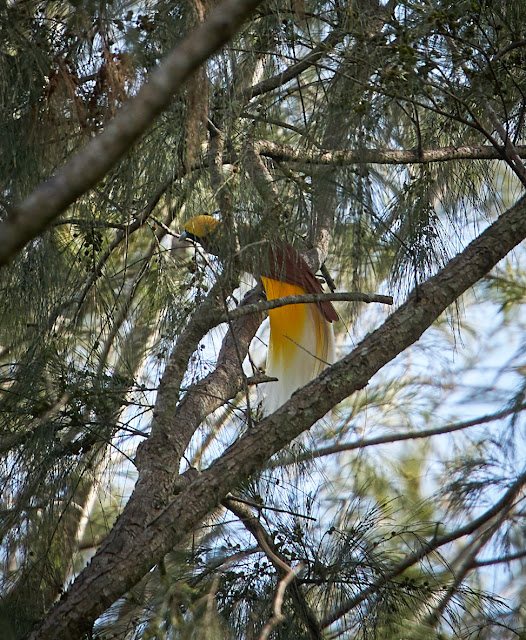 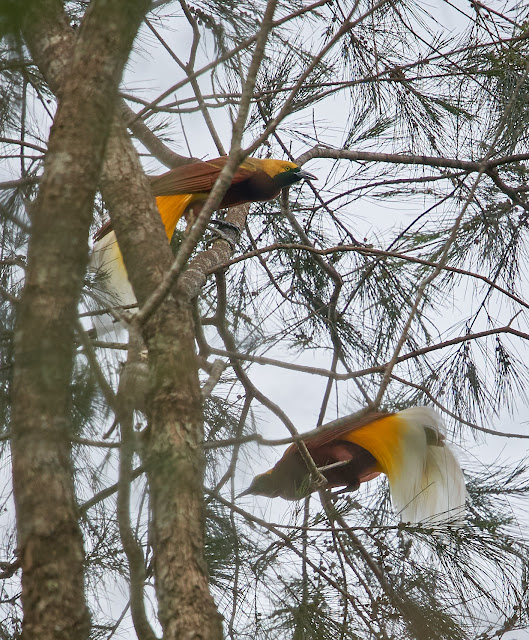 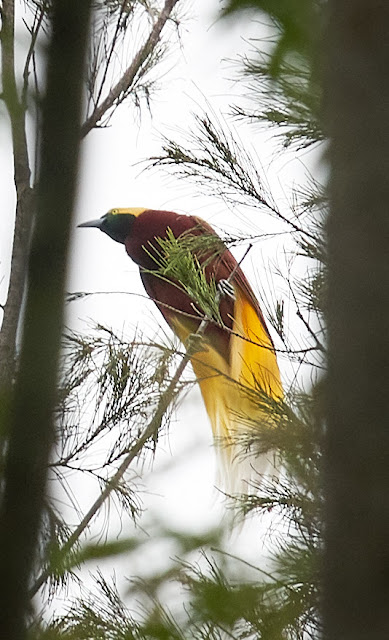 
Wednesday 10th October, we encountered blue bird of paradise (Paradisaea rudolphi) near the Kum stream, south of Mount Hagen, but despite a couple of clear though brief views, I didn't manage a useful photograph.

Back in the Rondon Ridge area (11th October), we spent a morning scurrying through forest in pursuit of clear views of the Superb bird of paradise, eventually being rewarded with two views of the distant birds dancing along branches. 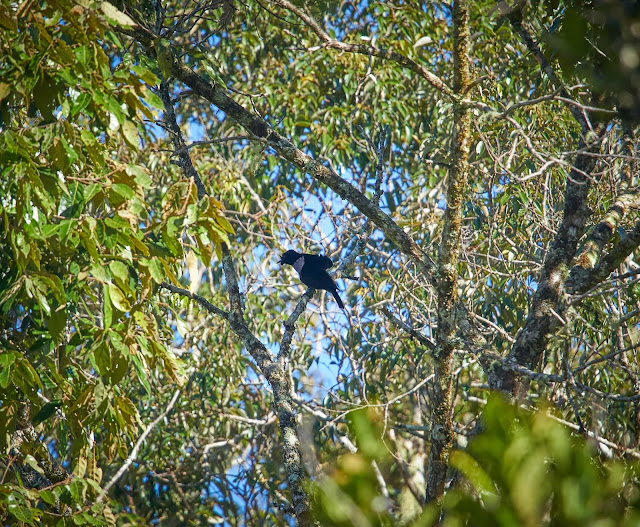 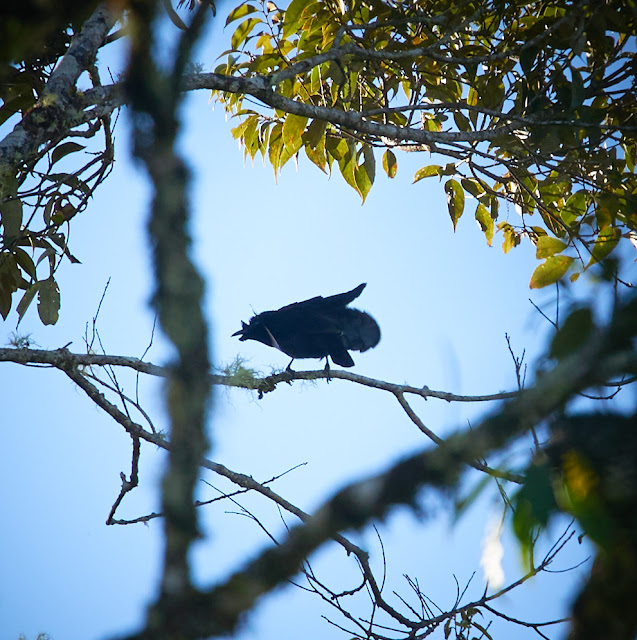 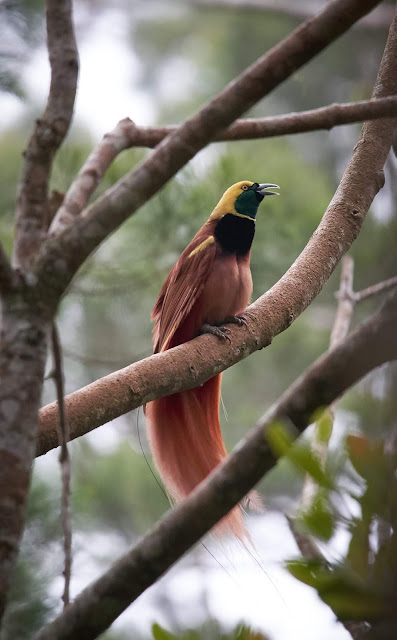 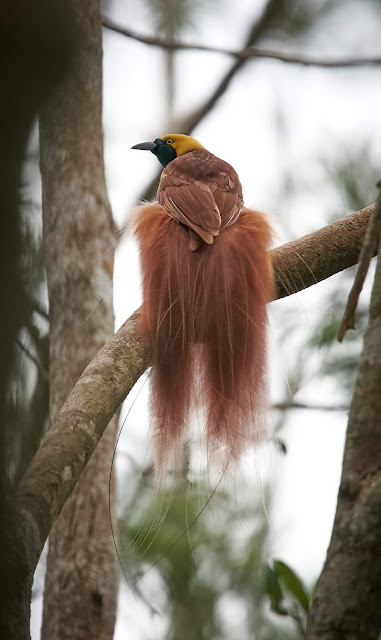 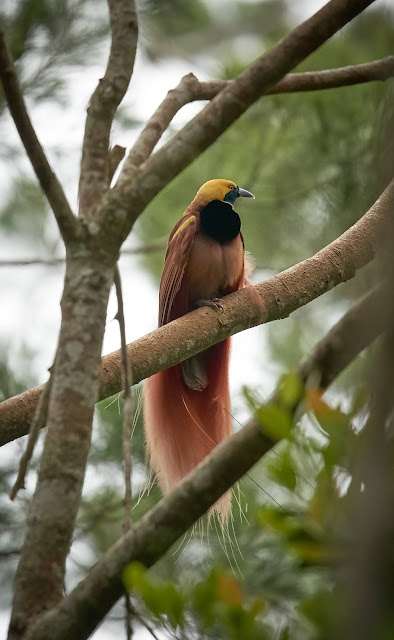 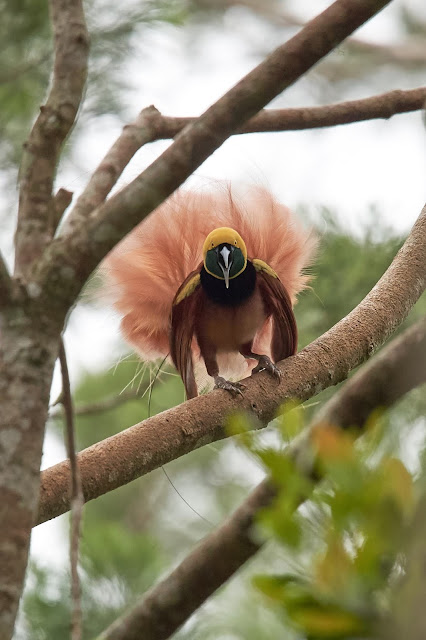 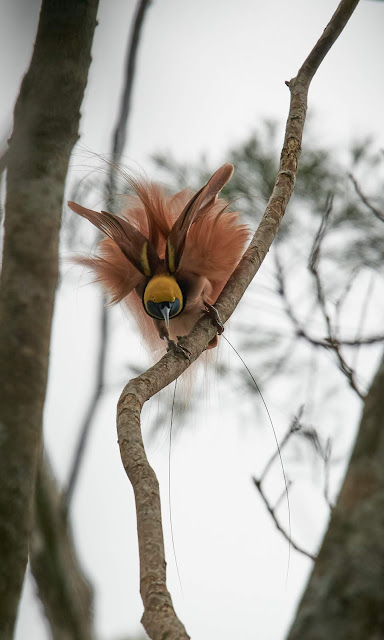 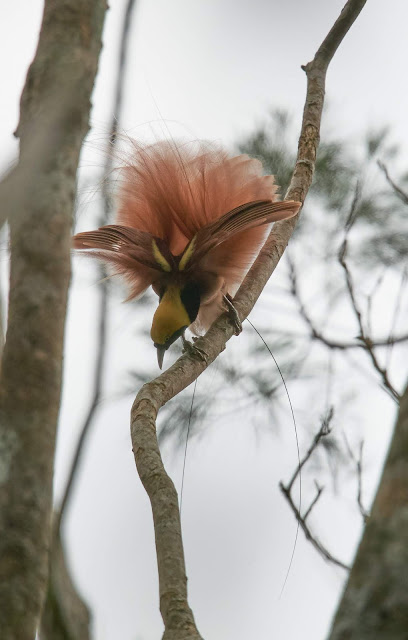 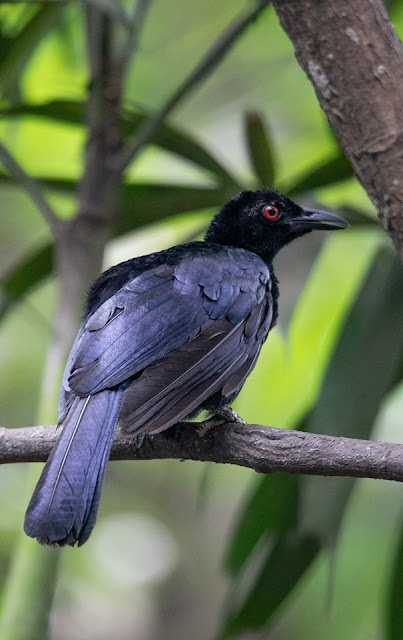 
Back in Port Moresby we had the chance to observe several birds of paradise more closely than in the wild, in a large free flight aviary. Here below is Lawes's parotia. 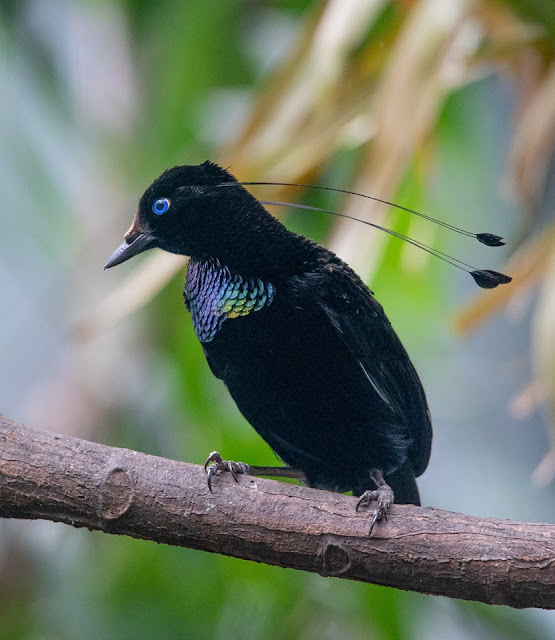 In his 1869 book, Wallace concluded his account of the birds of paradise as follows:

"Thus ended my search after these beautiful birds. Five voyages to different parts of the district they inhabit, each occupying in its preparation and execution the larger part of a year, produced only five species out of the fourteen known to exist in the New Guinea district. The kinds obtained are those that inhabit the coasts of New Guinea and its islands, the remainder seeming to be strictly confined to the central mountain-ranges of the northern peninsula; and our researches at Dorey and Amberbaki, near one end of this peninsula, and Sorong, near the other, enable me to decide with some certainty on the native country of these rare and lovely birds, good specimens of which have never yet been seen in Europe."

Our journey had taken us to those very central mountain ranges. Remarkably, first contact between the peoples of that area and outsiders took place only in 1933, over 60 years later than Wallace's visits. We encountered 11 species of birds of paradise and enjoyed some spectacular displays, all in addition to fascinating encounters with local tribes. It was an inspiring and fulfilling journey.