In the recent Netflix film "The Dig" there is a scene in which Basil Brown's character shows a small gold coin, known as a tremissis, to Edith Pretty, confirming that the ship burial at Sutton Hoo is of Anglo Saxon age as he had previously suspected.

A Merovingian tremissis found in Kent, 10 mm across

37 such coins, all from Merovingian Francia, were found at Sutton Hoo, associated with the remains of an elaborate purse. These coins have commanded a great deal of attention as a potential means to constrain the date of the burial. This is a highly imprecise process (the coins are not datable to within a range shorter than 16 years), relying on recognising issues associated with known rulers, identifying the youngest of these, speculating from there as to how much younger the undated coins may be, and then how much later the assembled group was deposited in the ship burial. 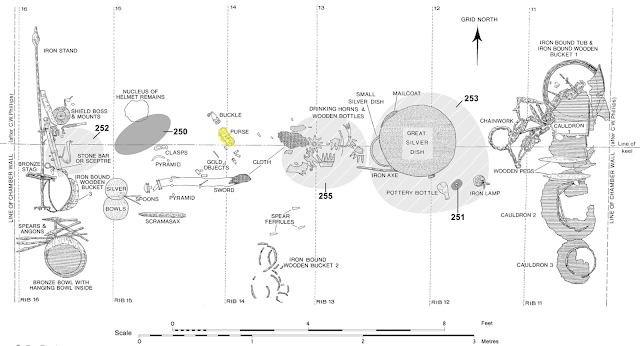 Plan of  the Sutton Hoo Mound 1 burial chamber in Burger et al (2016), combined from versions by Phillips and Bruce-Mitford. The position of the purse is coloured yellow.

I own a single example of a 7th century Merovingian tremissis (published in Abramson 2018), just a cm across with a sharp design (described as "extremely fine for the strike") of a stylised portrait head on the obverse and a very distinctive "anchored cross" or "croix ancrée" on the reverse. Nine of the Sutton Hoo coins (SH. 17-25) were of this "croix ancrée" type. The "barbarous" portraits on the obverse sides of these coins (some in a style known as "à l’appendice perlé") were formerly taken to suggest a late 7th century origin (Ponton d'Amécourt 1883) leading to initial dating of the Sutton Hoo hoard to the second half of the 7th century (references in Stahl & Oddy 1992). Grierson (1952) attributes these coins to the second quarter of the 7th century and quotes Le Gentilhomme (1940) who attributes them ".. à l'époque de Clovis II, [639-657] characterisée justement par l'éparpillement des ateliers rural et la favour de ce type de croix." Lafaurie (in Bruce-Mitford 1952), who was sent a full set of casts of the Sutton Hoo coins, focused on "triens no. 32" with its appendice perlé, arguing that the design first appeared in about 650. Later reasoning preferred a date for the ship burial in the 620s (assuming that the evidence from the coins permits such an early date), matching the death of King Raedwald of East Anglia.

My example weighs 1.26 g (the average for the Sutton Hoo coins is 1.27 g, Grierson 1970) and has a specific gravity of 15.75 indicating a gold content of about 73% (or a little higher if any copper is present). The theoretical weight for a Merovingian tremissis or Germanic shilling was 20 grains or 1.3 g according to Grierson (1961). (The weight for this one is incorrectly recorded as 1.2 g in Abramson 2018.) 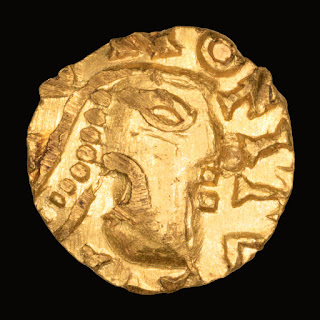 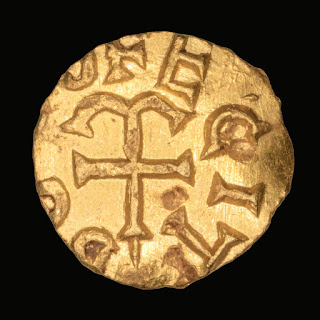 Parts of the letters forming the moneyer's name are off the small flan, but can be readily understood as "BOSO" (S recumbent) when compared with two similar coins (Münzen und Medaillen 8-10 December 1949, lot 386; and Monaco 15 November 2018, lot 318). The mint of the coin (DUNO) has been interpreted as Dun-le-Poëlier, about 75 km away from the Véretz mint (near Tours) identifed for the other two "BOSO" coins. It seems very plausible that "BOSO" may have worked in both locations during his career.

Stahl & Oddy (1992) reported gold contents estimated from specific gravity measurements for a series of coins for which approximate dates can be confidently inferred. A major fall in fineness occurred after the reign of Dagobert I as King of Neustria and Burgundy, ending in 639. My tremissis seems likely to predate this given its gold content, consistent with the higher values in samples from the 630s presented by Stahl & Oddy. Indeed, most comparable croix ancrée coins (on a search of similar auctioned pieces) are attributed to circa 620-640 where not given a much wider attribution such as 590-675 or "VI-VIIème siècle."

Given the broad trend of decreasing gold content with time (beyond Provence), the fineness of the 37 Sutton Hoo coins has been studied in detail (Oddy & Hughes 1975). According to Stahl & Oddy (1992), seven of the coins lie in the range of 70-80% gold. 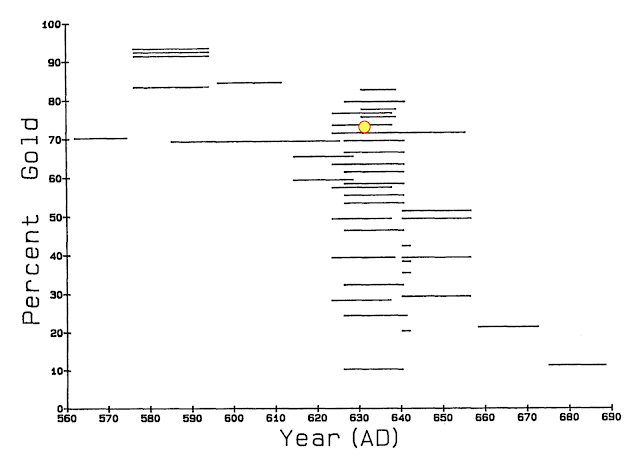 Figure 1 from Stahl & Oddy (1992) showing percentage gold for datable Merovingian coins, illustrating a general decline from late 6th to late 7th centuries, with considerable scatter in the 630s (a much larger sample than available for the other decades). The percentage gold value for the BOSO tremissis is shown by the yellow circle, superimposed on the sample data for the 630s although the actual position along the time axis is unknown. Notice the large uncertainty ranges in dates for almost all of the data points. 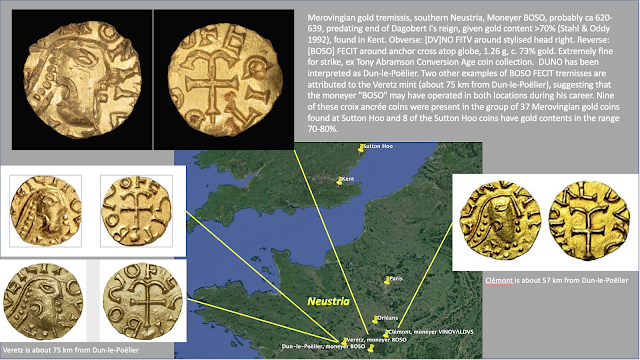 Map showing the locations of identified mints for the three BOSO coins and of another similar coin by moneyer VINOVALDUS. Other examples of this type of tremissis are known from Orléans and Paris mints.

Like the Sutton Hoo coins, my tremissis had travelled to southern England during the 7th century and was found in Kent (stated without further detail on the original label), an area with well known Frankish connections, such as the marriage alliance between King Æthelberht and the Frankish princess Bertha (Pope Gregory wrote to her in Kent in 601). Bertha of Kent had been raised near Tours, in the area where the BOSO coins were minted. Tony Abramson bought the coin from N Mills in July 2004 and I acquired it from his celebrated collection on 18th March 2021. Coins of this age are often fascinating enigmas, but piecing together the available information can be a satisfying exercise. The connection via the croix ancrée coins to the revelations of Sutton Hoo makes this tremissis a particularly resonant and evocative relic of those times.

Abramson, A. 2018. The Abramson Collection Coins of Early Anglo-Saxon England and the North Sea Area. Sylloge of Coins of the British Isles 69. Spink, London, 279 pp.

Oddy, W. A. and Hughes, M. J. 1975. The Analysis of the Sutton Hoo Gold Coins by the Method of Specific Gravity Determination. In R. Bruce-Mitford, The Sutton Hoo Ship-Burial: Volume 1, British Museum, London, 648-653.