May 07, 2015
A distinctive style of 10th century Viking sword chape is decorated with a wonderful piece of Borre-style art. An anthropomorphic figure is intertwined with a living tree, hands together at its own throat, its mask-like face having ears at the top (like a bear). The design is repeated on both sides of the chape. The human/animal face mask suggests a shamanic character. 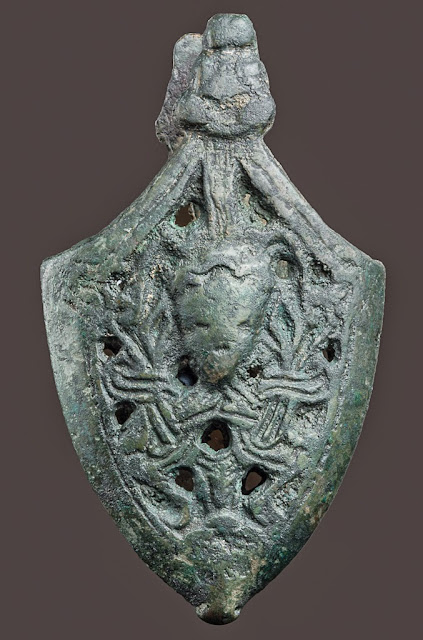 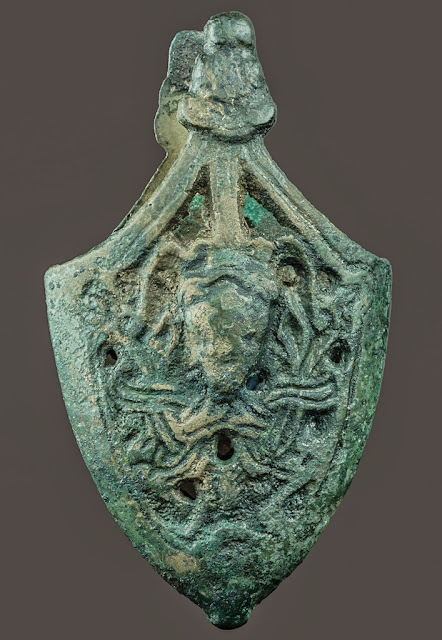 Sword chape, copper alloy, 69 mm, Paulsen (1953) type B, 10th C. An anthropomorphic figure is intertwined with a living tree, hands together at its own throat, its mask-like face having ears at the top (like a bear).

Hedenstierna-Jonson writes that the locations of the finds are spread over an extensive geographical area, "typically at places of some local, regional or even inter-regional importance: proto-towns (Hedeby and Birka), court sites (Stiegen) and the like. Several of the chapes were found in settlements (Araisi, Steigen, Birka, Hedeby, Nimschütz) rather than graves, and without their swords." She notes that "the total number of known sword chapes dating from the Viking Age is extremely limited" and that their distribution differs from that of the swords. "In fact they are generally uncommon, and even though they mainly are connected with a high status weapon, the sword, this is not always the case. They also appear on their own and seem to have had a meaning and value apart from being the decorative end of a scabbard."

Ambrosiani (2001), in his "The Birka Falcon", writes that the group of sword chapes bearing a central mask represent “the earliest of the various Viking Age chape types.” A mid to Late 10th century age is assigned. "The limited number of motifs to be found on chapes indicates that they were designed to symbolise something very particular. One possibility is that they functioned as symbols of rank or office."

Hedenstierna-Jonson finds strong parallels with the Jellinge Stone crucifixion scene and suggests a connection with Danish king Harald Bluetooth. I do not find this connection  at all compelling, however. The hands together at the figure's throat are highly incompatible with a crucifixion interpretation, as are the animal character of the mask and the intertwining of the figure in a two-branched living tree. 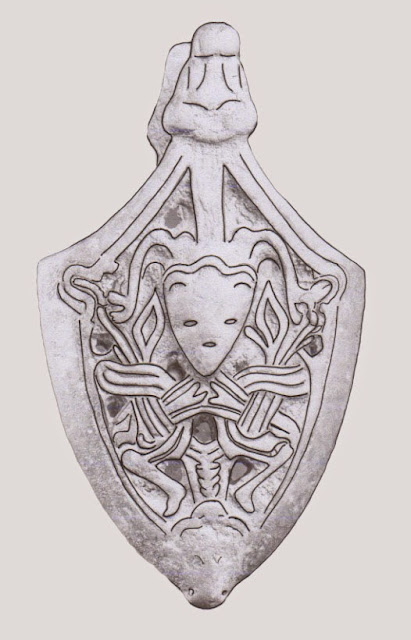 Drawing to highlight the design elements of the chape illustrated above.


Perhaps this is rather an image of a shamanic self-sacrificing Odin hung on a tree (widely inferred to have been Yggdrasil) in his quest for knowledge of the runes:


I know that I hung on a windy tree
nine long nights,
wounded with a spear, dedicated to Odin,
myself to myself,
on that tree of which no man knows
from where its roots run.


This explanation I find to be far more compelling than the earlier crucifixion interpretation. It adds to the fascination of an already intriguing image made more than a millennium ago.

Ambrosiani, B. 2001. The Birka Falcon. Eastern Connections Part One: The Falcon Motif. Birka Studies V. B.