The Viking Mammen Style on a Rare British Brooch

February 06, 2016
The Mammen style in the sequence of Viking art styles is very rarely encountered on artefacts found in the British Isles (Kershaw 2013). It has been documented on two brooches (held in the Ashmolean Museum, Oxford), one from West Stow Heath, Suffolk and the other from Bergh Apton, Norfolk (Hinton 1974, Kershaw 2013).

The design on these brooches consists of a stylised bird with backward looking head from which a long head lappet extends, forming an interlace pattern with the bird's tail and wings. A leg with clawed foot is also depicted. The bird is designed to provide a compact fit into the square frame of the brooch.

Kershaw (2013) notes that whereas the Mammen style of the bird is Scandinavian in origin, the square design of the brooch is broadly comparable with some rectangular fibulae found in northern Germany and the Netherlands. These are dated to the tenth century, which is consistent with the appearance of the Mammen style in Scandinavia.

Two other specimens of this form of brooch have been recorded in the Portable Antiquities Scheme database, a degraded example from Lincolnshire and the other an example said to be from East Anglia. A new specimen, better preserved than the former pieces and differing in the presence of a perforation adjacent to the termination of the head lappet, was found recently in Cambridgeshire. The new brooch is illustrated below, together with an interpretive sketch. The downward projection in the throat region suggests that the prototype for this very stylised design could have been a cockerel, the projection representing the wattle.

A cockerel, Gullinkambi ("golden comb"), resident in Valhalla in Norse mythology, is one of three cockerels who crow to announce the beginning of Ragnarok. 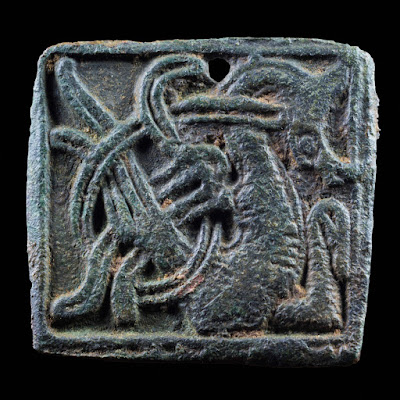 The new Mammen-style brooch, 26 x 24 mm, found in Cambridgeshire. Note the perforation adjacent to the tip of the curved head lappet of the bird. 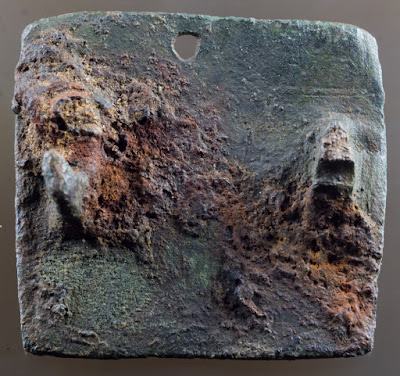 The reverse of the new brooch, showing the perforation and widely spaced lug and catchplate. 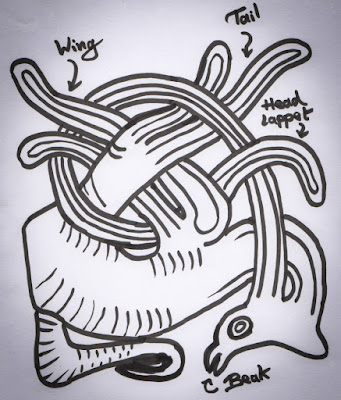 A sketch to interpret the design. The downward projection in the vicinity of the bird's throat could be taken to indicate that the figure is loosely based on a cockerel, the projection being its wattle. A less stylised bird brooch from the Danelaw can be seen here. The highly stylised bird design on the famous Mammen axe is shown here.

Hinton, D.A. 1974. A Catalogue of the Anglo-Saxon Ornamental Metalwork in the Department of Antiquities, Ashmolean Museum. Oxford: Clarendon Press.