January 23, 2019
Over 2017 and 2018, I reached many of the areas Alfred Wallace visited on the journeys he described in "The Malay Archipelago" (1869), from Sumatra and other Indonesian Islands to Borneo to Papua New Guinea. I was missing one excursion that's quite close to home, however, this being Mount Ophir, the highest mountain in southern peninsular Malaysia. Wallace made the climb in 1854.

"Having determined to visit Mount Ophir, which is situated in the middle of the peninsula about fifty miles east of Malacca, we engaged six Malays to accompany us and carry our baggage. As we meant to stay at least a week at the mountain, we took with us a good supply of rice, a little biscuit, butter and coffee, some dried fish and a little brandy, with blankets, a change of clothes, insect and bird boxes, nets, guns and ammunition." 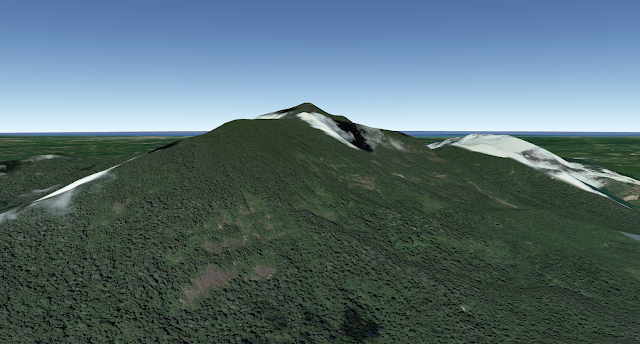 View of the forest-clad Mount Ophir, (1276 m), looking south with the Straits of Malacca behind, Google Earth image


James and I decided to make this a first New Year Resolution and set off on the 3rd January 2019 to Malacca, just a couple of hours southeast from Kuala Lumpur.

Malacca is always interesting to walk through and we began with a Portuguese seafood lunch of grilled fish and garlic prawns. The Christmas decorations were still up, but a little forlorn looking in the absence of people, we being the only customers. 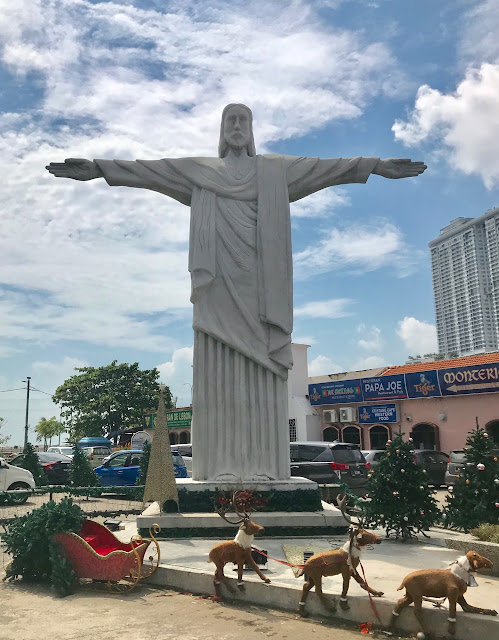 Cristo Redentor with reindeer in the old Portuguese quarter of Malacca


Wallace wrote about the evolution of the Portuguese language used in this part of Malacca:

"The Portuguese spoken at Malacca is a useful philological phenomenon. The verbs have mostly lost their inflections, and one form does for all moods, tenses, numbers, and persons. Eu vai, serves for “I go,” “I went,” or, “I will go.” Adjectives, too, have been deprived of their feminine and plural terminations, so that the language is reduced to a marvellous simplicity, and, with the admixture of a few Malay words, becomes rather puzzling to one who has heard only the pure Lusitanian."

We later visited the tiger god shrine at the old Cheng Hoon Teng temple, both of us being Tiger Year individuals and then had a relaxed wander around town, visiting some of the museums and stopping to buy supplies for the climb the next day.

Friday 4th January 2019 saw an early departure by car for Gunung Ledang. We arrived about 6:30 am. During a lengthy wait for the park office to open, we watched the moon, just visible above the forest, and heard the first noisy signs of the long-tailed macaques and their less riotous silver leaf monkey cousins. There was also a very large tropical swallowtail moth and an intriguingly shaped banded bullfrog. 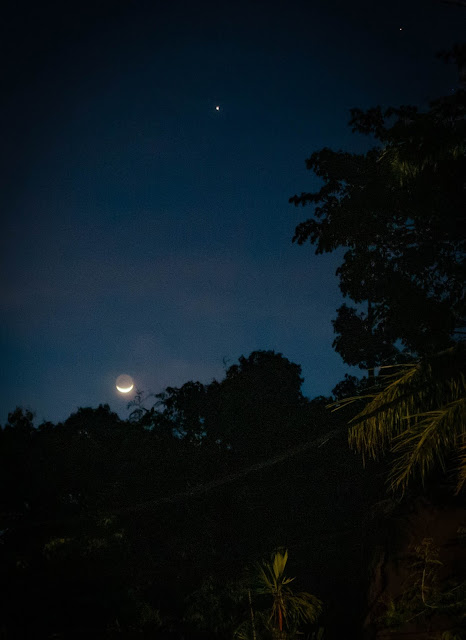 Moon and forest at the base of Gunung Ledang (Mount Ophir), before sun-up 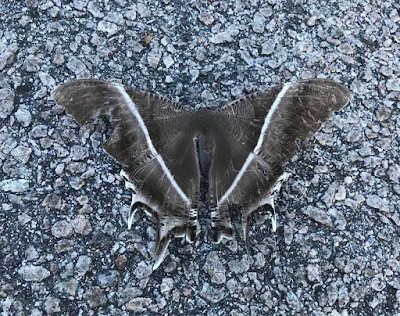 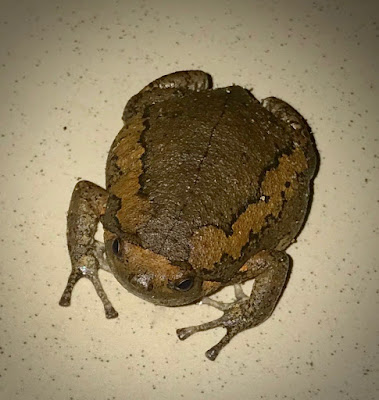 
At 7:00 a gentleman arrived by car to deliver pack lunches and he settled down on a bench to wait, like us, for the park staff.

Shortly before 8:00 am, park staff finally appeared, collected the climbing fee and made an inventory of the items in our backpacks in order to keep tabs on us bringing back down everything we took up the mountain with us.

Our guide explained the route and its checkpoints and then off we went, beginning with 700 concrete steps before the wilder steep path continued up through the forest, the climb aided by tree roots and branches.

Wallace, in the summer of 1854, mentioned the presence of rhinoceros tracks and some in his party claimed to have seen the animal. Camped at the base of the mountain, Wallace wrote, "This was the country of the great Argus pheasant, and we continually heard its cry. On asking the old Malay to try and shoot one for me, he told me that although he had been for twenty years shooting birds in these forests he had never yet shot one, and had never even seen one except after it had been caught. The bird is so exceedingly shy and wary, and runs along the ground in the densest parts of the forest so quickly, that it is impossible to get near it; and its sober colours and rich eye-like spots, which are so ornamental when seen in a museum, must harmonize well with the dead leaves among which it dwells, and render it very inconspicuous." I remembered a wonderful encounter with this spectacular bird in the forests of Gunung Leuser, Sumatra.

The most exciting animals we encountered on our climb, though heard and not seen, were the Lar gibbons with their enchanting exotic conversation, their "great call" involving vivid musical hoots and quavering. Truly delightful.

Above 1050 m elevation we came across several pitcher plants (Nepenthes ampullaria and Nepenthes gracilis), as did Wallace in 1854. 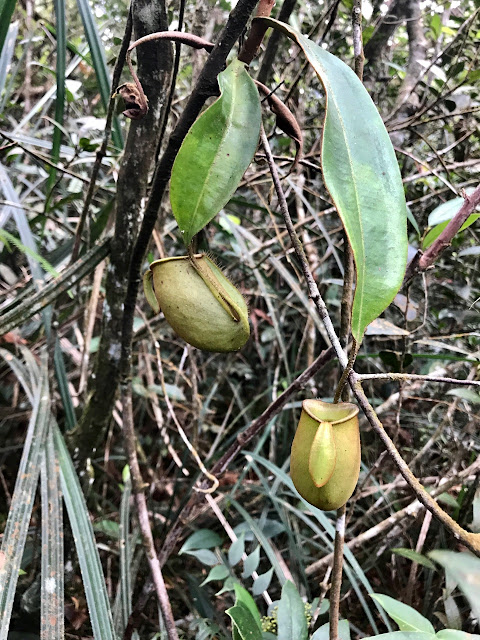 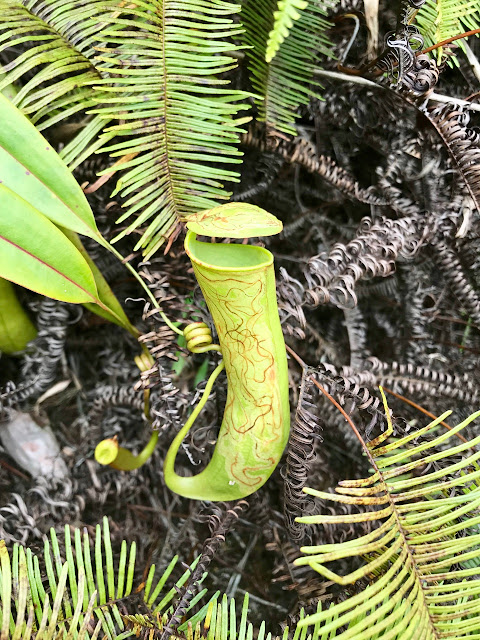 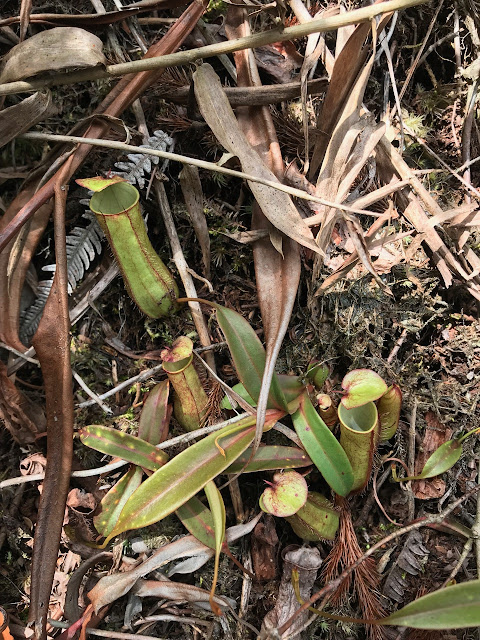 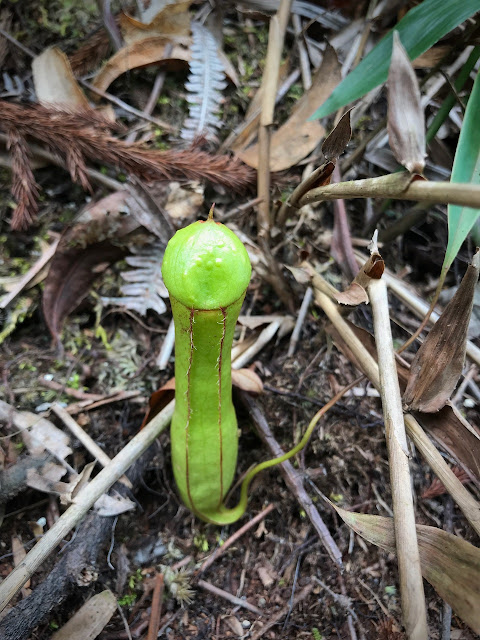 Desperate for water, Wallace’s group eventually drank from the pitchers: “At last we turned to the pitcher-plants, but the water contained in the pitchers (about half a pint in each) was full of insects, and otherwise uninviting. On tasting it, however, we found it very palatable though rather warm, and we all quenched our thirst from these natural jugs.”

Wallace was fascinated by the conifers and ferns living on the mountain:

"A few coniferae of the genus Dacrydium here first appeared, and in the thickets just above the rocky surface we walked through groves of those splendid ferns Dipteris Horsfieldii and Matonia pectinata, which bear large spreading palmate fronds on slender stems six or eight feet high. The Matonia is the tallest and most elegant, and is known only from this mountain, and neither of them is yet introduced into our hot-houses." 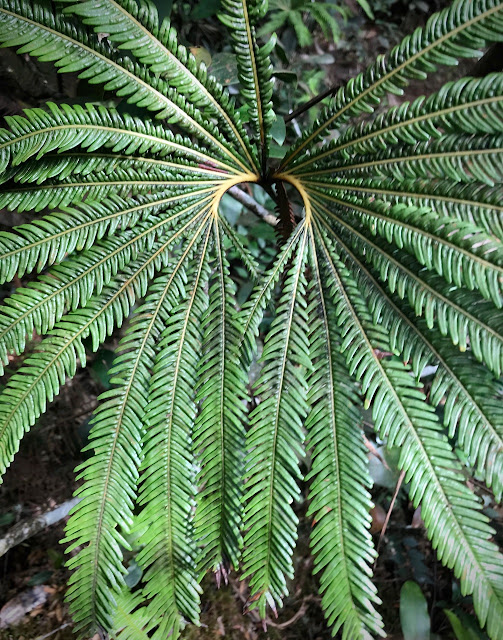 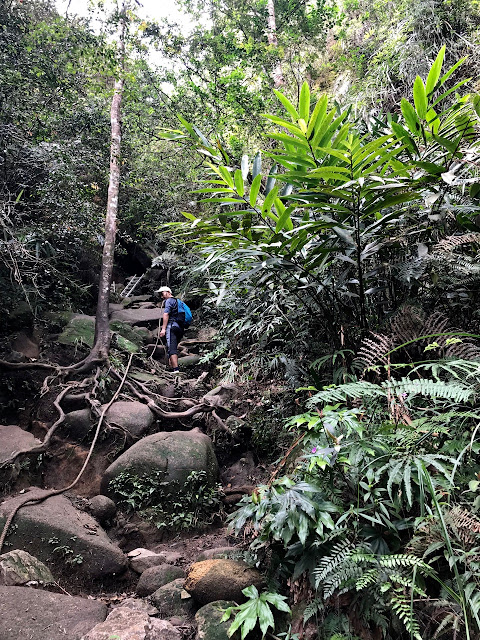 Ferns, including Dipteris in the foreground

As we climbed, we reached a zone of stunted trees known as the "Bonsai Zone" to the guides. 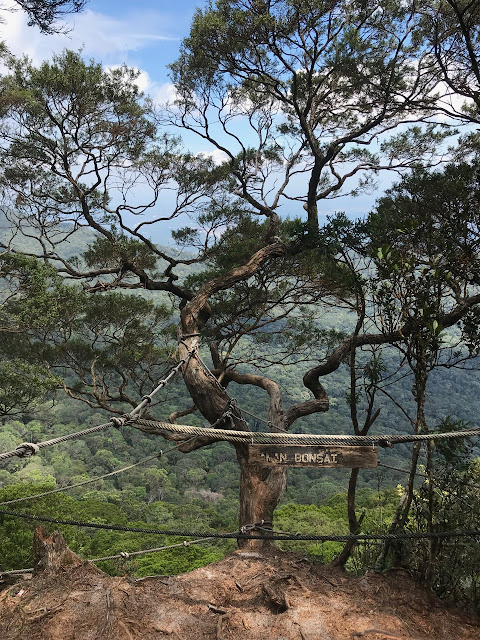 "Bonsai" at a point where someone posing for photographs went over the edge, we were told


Small conifers appeared in the miniature forest, as noted by Wallace (see above). 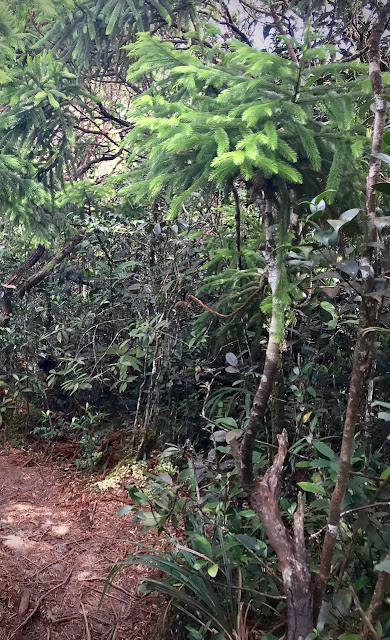 
At  a certain elevation, mosses became abundant. Wallace provides the following description: "Besides a bushy vegetation the ground was covered knee-deep with mosses on a foundation of decaying leaves and rugged rock, and it was a hard hour’s climb to the small ledge just below the summit, where an overhanging rock forms a convenient shelter, and a little basin collects the trickling water." 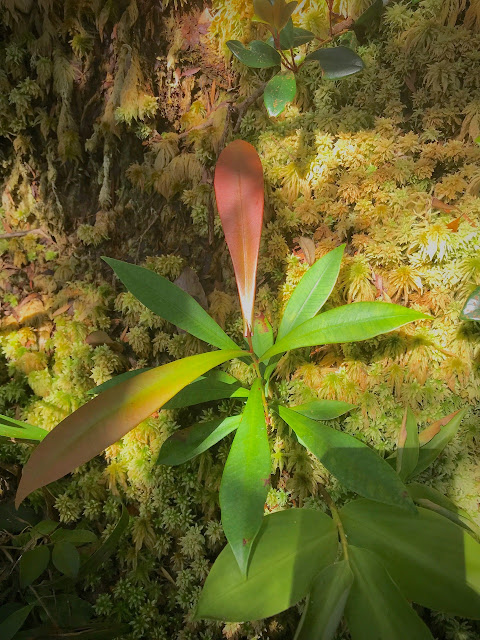 Masses of mosses appeared towards the top of the mountain


We used ladders and ropes to cross the steep sections of exposed granite. These exposed rocky areas , or “Padang-batu,” were described by Wallace as follows:

"After passing a little tangled jungle and swampy thickets through which our men had cleared a path, we emerged into a fine lofty forest pretty clear of undergrowth, and in which we could walk freely. We ascended steadily up a moderate slope for several miles, having a deep ravine on our left. We then had a level plateau or shoulder to cross, after which the ascent was steeper and the forest denser until we came out upon the “Padang-batu,” or stone field, a place of which we had heard much, but could never get anyone to describe intelligibly. We found it to be a steep slope of even rock, extending along the mountain side farther than we could see. Parts of it were quite bare, but where it was cracked and fissured there grew a most luxuriant vegetation, among which the pitcher plants were the most remarkable." 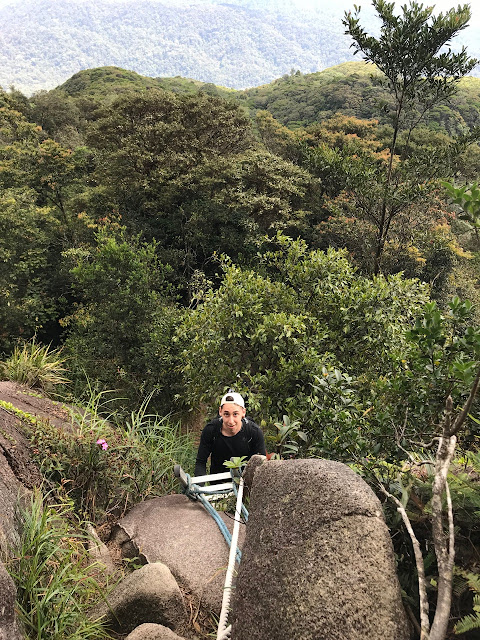 James on a ladder 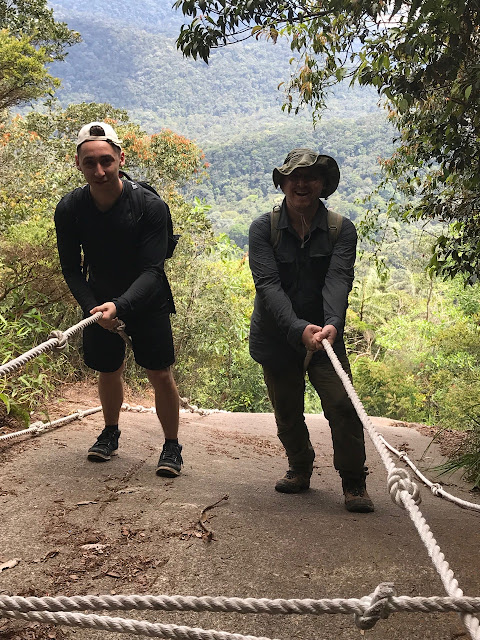 The ropes are very helpful.


Wallace described arriving at the top as follows:

“Here we put down our loads, and in a few minutes more stood on the summit of Mount Ophir, 4,000 feet above the sea. The top is a small rocky platform covered with rhododendrons and other shrubs. The afternoon was clear, and the view fine in its way — ranges of hill and valley everywhere covered with interminable forest, with glistening rivers winding among them.” 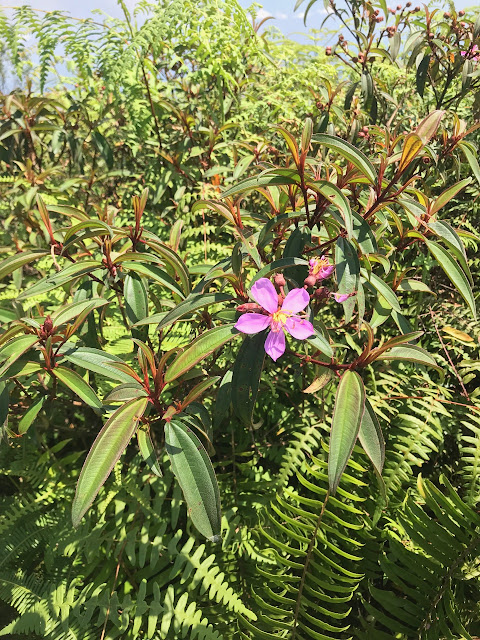 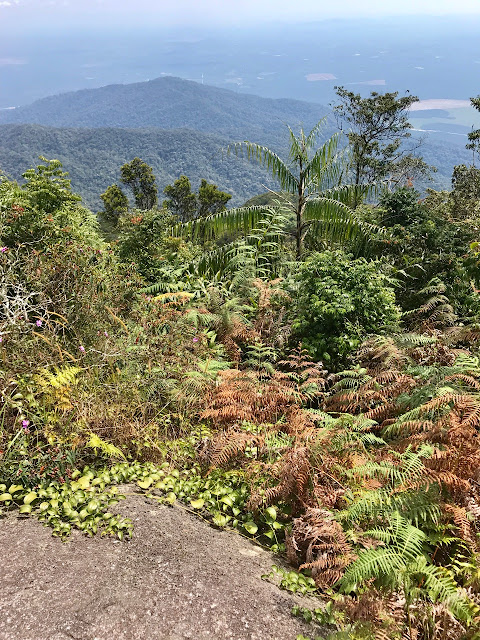 A series of fairly glorious view awaits at the top.

Wallace was not entirely impressed though:

“In a distant view a forest country is very monotonous, and no mountain I have ever ascended in the tropics presents a panorama equal to that from Snowdon, while the views in Switzerland are immeasurably superior.”


We celebrated being there. 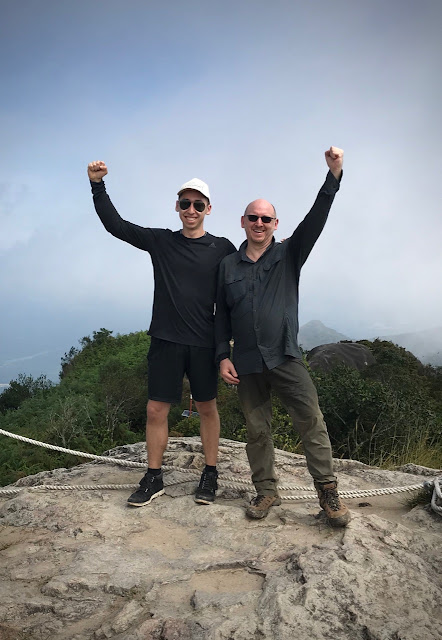 
It's a long slog back down the mountain, but this camouflaged green spider caught my eye at one point. Shortly afterwards, James saw a flying Draco lizard glide across the path in front of us. 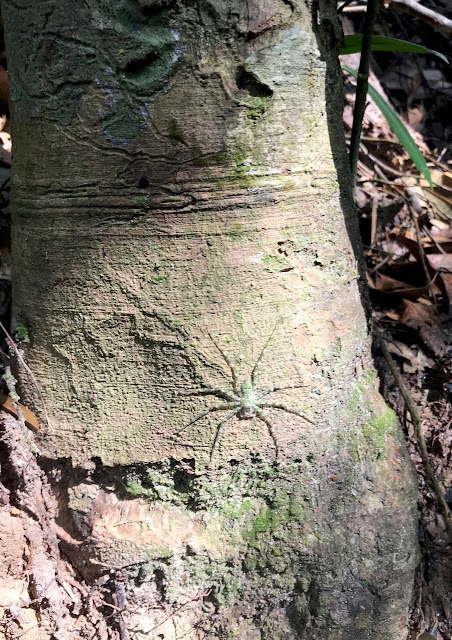 
I was glad to be back at the base of the mountain, descending steep slopes being my least favourite part of these adventures.

Overall, this was a thoroughly enjoyable day and the observations along the way matching Wallace's experience made the climb a rewarding addition to the hobby of visiting the places he describes in The Malay Archipelago (1869).

Back in Malacca, we celebrated with a seafood buffet and gins before retiring to a long deep sleep.

The story of first contact in 1933 with the peoples of the central Wahgi Valley in the Papuan highlands is a remarkable one. An unsuspected group of thriving stone-age cultures came to the attention of the outside world when the Leahy brothers first flew over the area and later reached it on foot. Tribal men carried elaborate stone axes and this contact with extant stone-age cultures provided fascinating insights on how their stone tools, such as axes and adzes were hafted. The available evidence was collated in Burton's (1984) Thesis at the Australia National University, on "AXE MAKERS OF THE WAHGI: Pre-colonial industrialists of the Papua New Guinea highlands." I saw a number of these old axes during a visit to the highlands near Mount Hagen in October 2019 (see the Paiya chief photograph below). The area of that journey is shown in the google Earth image shown below. The upper Wahgi River valley with locations of Paiya Village, Mount Giluwe and Mount Hagen t
Read more