Wallace's description was as follows:
"One of the most curious and interesting reptiles which I met with in Borneo was a large tree-frog, which was brought me by one of the Chinese workmen. He assured me that he had seen it come down, in a slanting direction, from a high tree, as if it flew.
On examining it, I found the toes very long and fully webbed to their very extremity, so that when expanded they offered a surface much larger than the body. The fore legs were also bordered by a membrane, and the body was capable of considerable inflation. The back and limbs were of a very deep shining green colour, the under surface and the inner toes yellow, while the webs were black, rayed with yellow. The body was about four inches long, while the webs of each hind foot, when fully expanded, covered a surface of four square inches, and the webs of all the feet together about twelve square inches. As the extremities of the toes have dilated discs for adhesion, showing the creature to be a true tree-frog, it is difficult to imagine that this immense membrane of the toes can be for the purpose of swimming only, and the account of the Chinaman, that it flew down from the tree, becomes more credible.
This is, I believe, the first instance known of a "flying frog," and it is very interesting to Darwinians as showing, that the variability of the toes which have been already modified for purposes of swimming and adhesive climbing, have been taken advantage of to enable an allied species to pass through the air like the flying lizard. It would appear to be a new species of the genus Rhacophorus, which consists of several frogs of a much smaller size than this, and having the webs of the toes less developed."
Here is Wallace's early illustration of the frog showing the fully expanded webs of the feet. 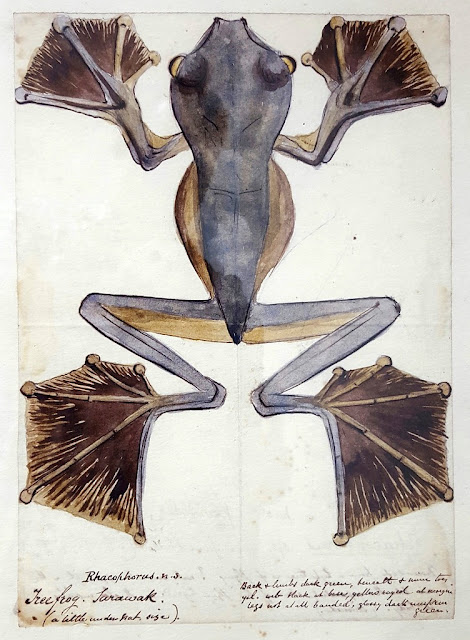 Wallace's example of the frog was found in Sarawak, Borneo and I had looked for the frog there over a couple of visits, in Kubah National Park, but without success. I write, "without success," but we did encounter 16 other species of frog on that mountain, including many examples of another Rhacophorus glider, the harlequin, happily gliding across the famous frog pond, and sometimes landing on my camera! 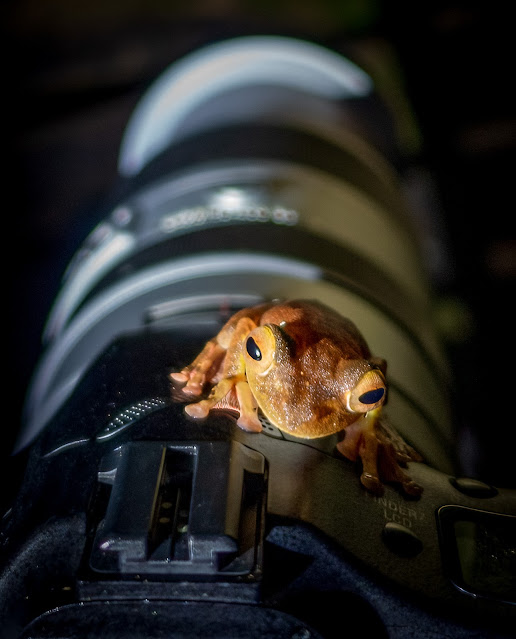 Hello! A harlequin flying frog (Rhacophorus pardalis) had just glided across the pond on Kubah mountain, choosing my camera as a landing pad.
Finally, in September 2022, I saw Wallace's flying frog, not in Sarawak, but in the Danum Valley of Sabah. Two individuals were perched on a large leaf together with a file-eared frog (Polypedates otilophus). As always, I am impressed by the clarity of Wallace's description. Here below is my photo of the frog. Notice the black and yellow rayed webs of the feet and the membrane attached to the forelegs. 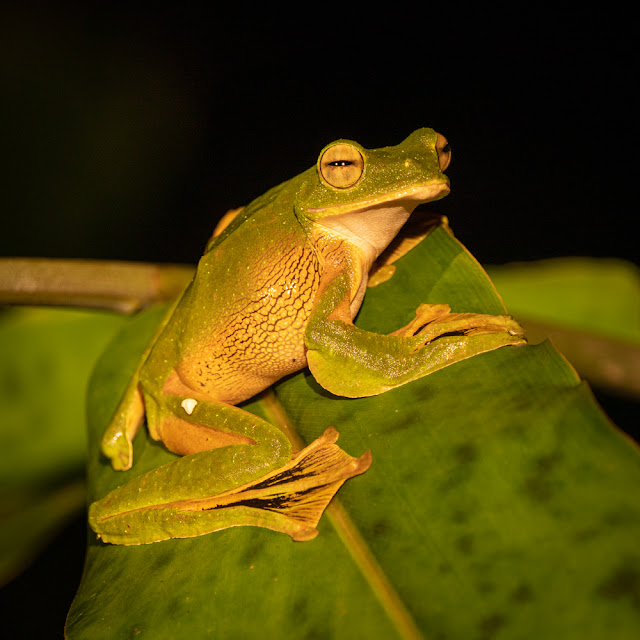 Others in our small Danum Valley group were bemused at my pleasure in finally encountering this iconic species. It was one that had long eluded me. For me, this was one of the most enjoyable of Wallace's discoveries and a wonderful connection with his explorations in the region as recounted in "The Malay Archipelago."