Mulu is a dramatic area of forested limestone hills in northwest Borneo, the site of an incredible network of caves, some with huge individual chambers, others smaller in scale, but richer in beautiful cave formations. Bats in their millions inhabit the caves.

I had visited once before, in 2004, but wanted to see the area again, with the idea of making some better pictures of the bats and butterflies, specifically the Rajah Brooke's. 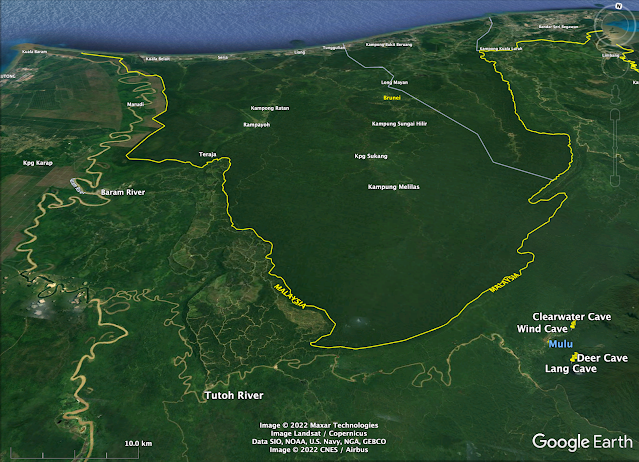 A view to the North showing the location of Mulu and its famous caves at lower right, south of dark and forested Brunei. The Baram river at left terminates at its delta near the Sarawak city of Miri. The Malinau River at Mulu feeds into the Tutoh River which feeds into the Baram.

We registered at the park entrance and set off on the walk to Deer Cave, steaming in the humidity. Frog song sounded from either side of the wooden walkway, along with insect calls and the occasional bird.

The limestone amphitheatre (a kind of tropical version of Malham Cove in Yorkshire), with its entrances to the massive Deer Cave and the smaller more intimate jewel box of Lang Cave, holds a viewing area from which the famous evening exodus of bats can be observed. As we waited, a Rajah Brooke's birdwing flitted by, too fast for photos. Around 6:30 pm, columns of wrinkle-lipped bats began to emerge in pulses, streaming upwards before redirecting to fly past the forested hill to our right (south-east). 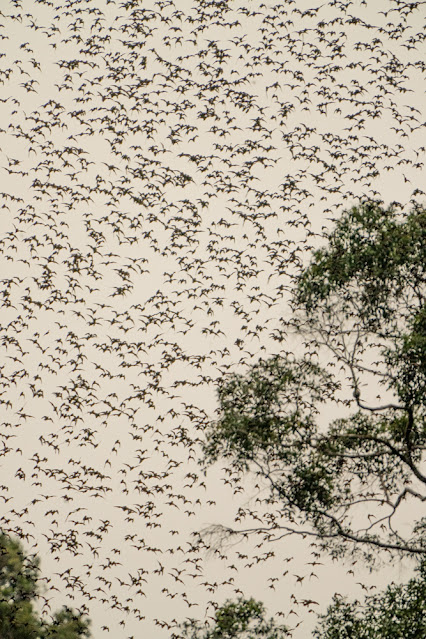 On my previous visit here, in 2004, I watched bat hawks wait patiently on their perches for the flight of the bats to begin and then join the hunt. This evening, however, there were no predators in evidence.

As the streams of bats continued to surge out of the cave, the sky took on some colour. 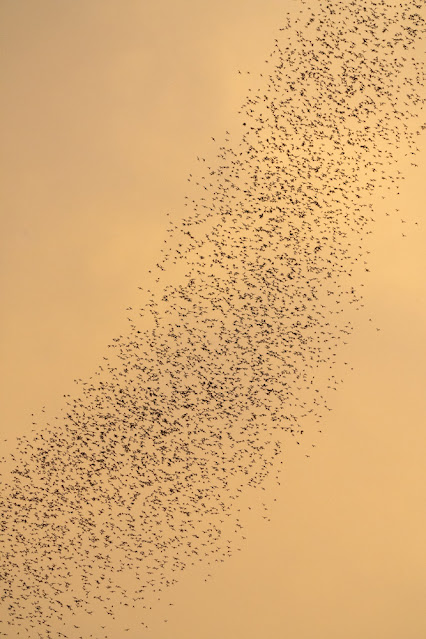 We set off on the walk back, but hadn't gone far when rain started to fall. There was a delay before it penetrated the canopy of leaves above, but soon we are soaked. So much for the dry season, this was a full tropical downpour, complete with thunder and lightning.

The following day we set off by long boat, stopping at the Penan village. I learnt "Jian ngivum" - good morning; "Jian kenin" - thank you; and "Ngelajam" - bye. They had fine baskets, nose flutes, forest snail shells and sweet beadwork items in the form of animals and decorative patterns. I bought a selection and, after some trial and error, can now even play a selection of notes on the nose flute.

After climbing up to and through Wind Cave, we continued on to the nearby Clearwater Cave. I remembered the endemic Monophyllaea pendula plants at the entrance from my previous visit. A different species, Monophyllaea glauca with its tiny delicate white flowers, was present within the cave.

Later, I watched a Rajah Brooke's birdwing enjoying a red flower and took the opportunity to finally make some photographs of this spectacular butterfly. Here is Alfred Russel Wallace (1869, pg 29) on this form:

".. I obtained some rare and very handsome insects, the most remarkable being the Ornithoptera Brookeana, one of the most elegant species known. This beautiful creature has very long and pointed wings, almost resembling a sphinx moth in shape. It is deep velvety black, with a curved band of spots of a brilliant metallic-green colour extending across the wings from tip to tip, each spot being shaped exactly like a small triangular feather, and having very much the effect of a row of the wing coverts of the Mexican trogon laid upon black velvet. The only other marks are a broad neck-collar of vivid crimson, and a few delicate white touches on the outer margins of the hindwings. This species, which was then quite new and which I named after Sir James Brooke, was very rare. It was seen occasionally flying swiftly in the clearings, and now and then settling for an instant at puddles and muddy places, so that I only succeeded in capturing two or three specimens."

It's an excellent description. 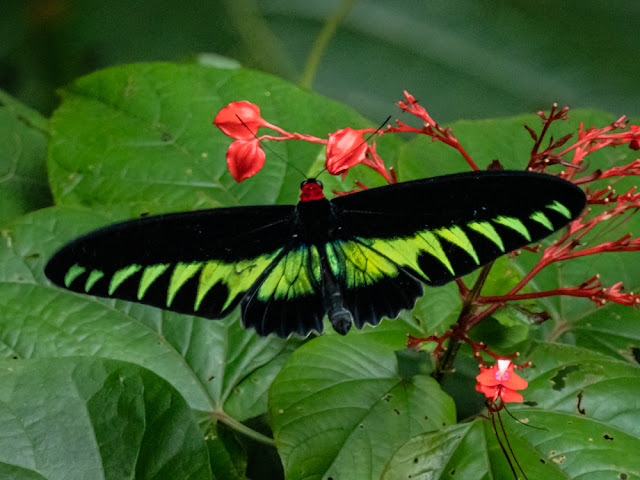 These birdwings are always a delight to see.

In the afternoon, we repeated the walk to Deer Cave of the previous afternoon, but having more time available, paid more attention to the small creatures along the way. There were stick insects, both slender and robust; a great variety of butterflies (including commander, great marquis, giant tree nymph, black and white Helen swallowtail, great mormon swallowtail, common mime swallowtail, Malaysian owl, small leopard and gem demon). There were also many dragonflies (treehuggers, red perches, common parasols, oriental blue dasher, blue marsh hawks) and damselflies. 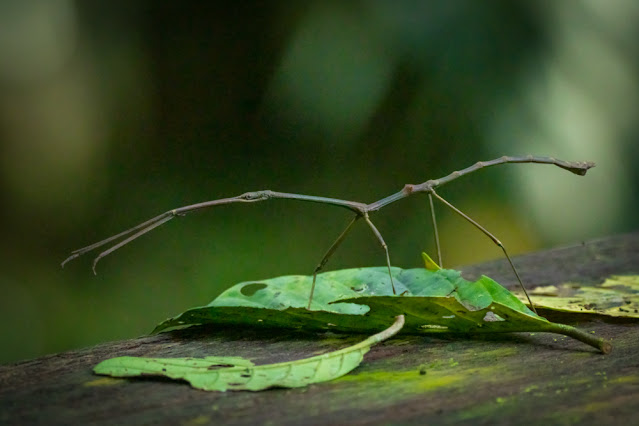 An elegant stick insect on the walk to Deer Cave. 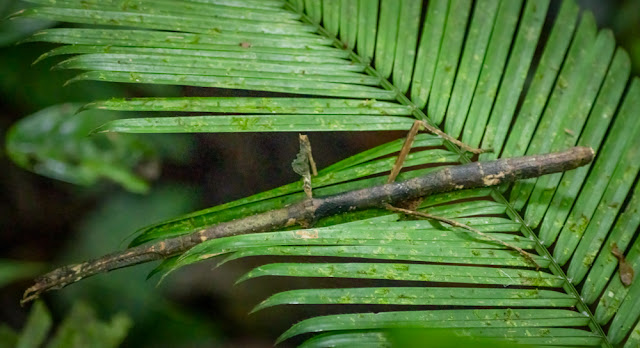 and a more robust example

I think my favourite insects were the charming lantern bugs. 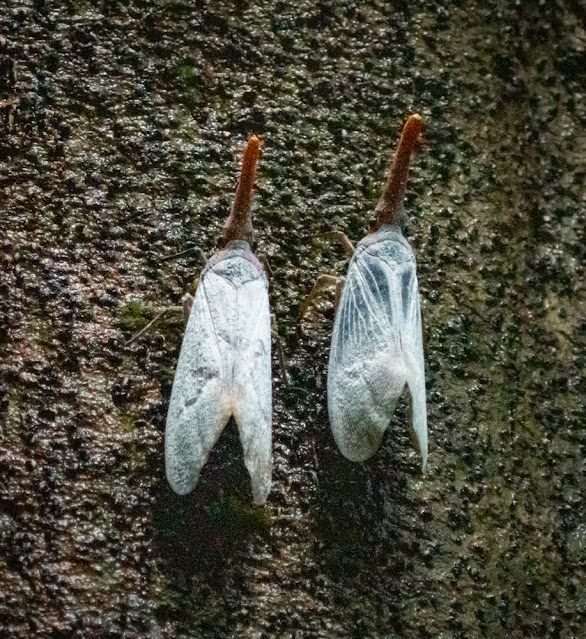 I had seen Pyrops sultanus before, in both Sarawak and Sabah. 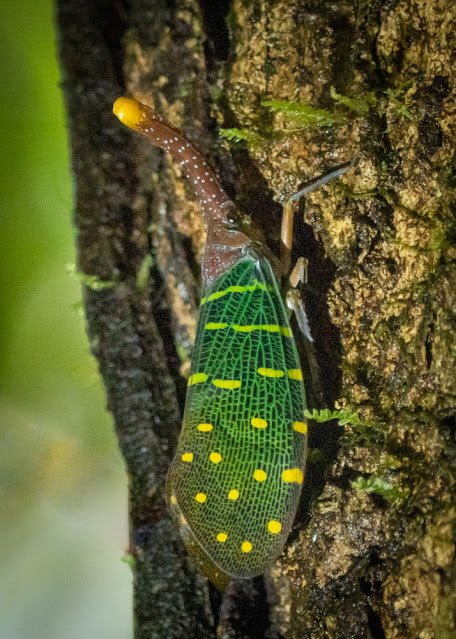 We entered Deer Cave, passing by the giant and spectacular fishtail palms outside the entrance. The path inside the cave has been moved since my last visit in 2004, avoiding the pungent guano slopes. 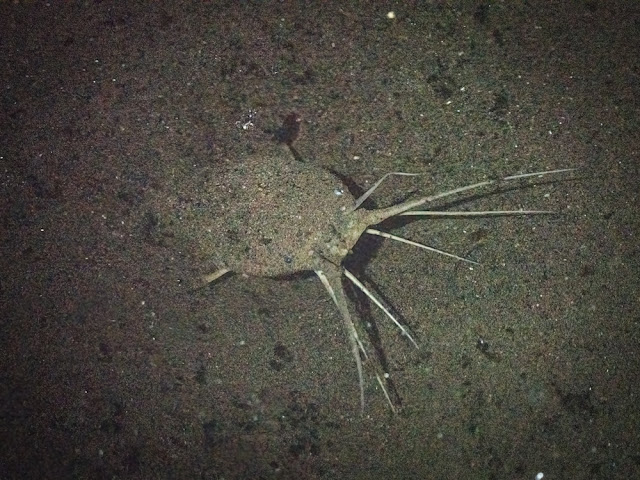 Lang Cave is much smaller in scale than Deer Cave, a charming jewel box of beautiful cave formations and closer views of roosting fruit bats. 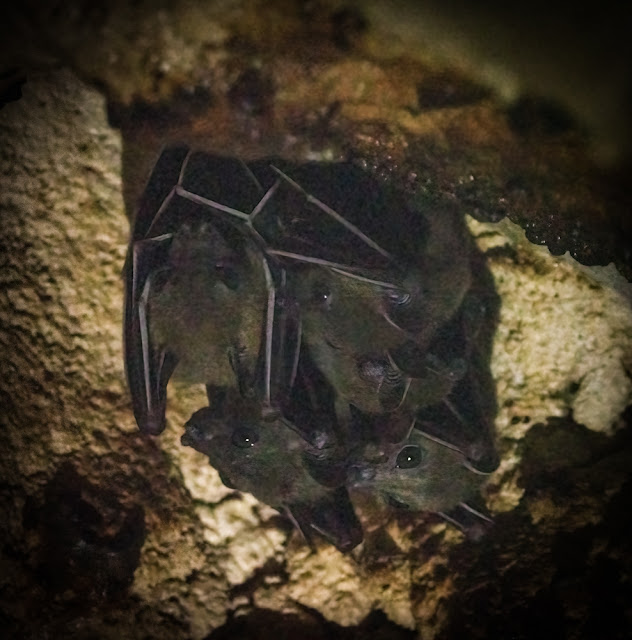 Once more (though earlier than the previous day), the rain fell and clouds descended, this was not an evening for the bat flight. We were drenched once again.

Our final morning we spent watching lizards and birds. This green-crested lizard (Bronchocela cristatella) sported a remarkably long tail. From the same spot, I watched a pair of Borneo skinks (Dasia vittata). 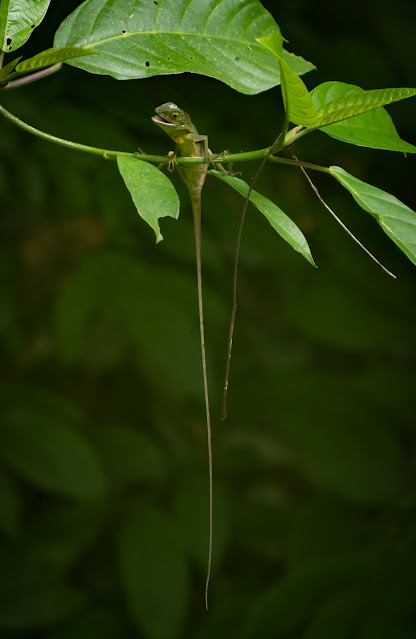 Such a long tail! Mulu is well worth a visit, different, not for the distinctive mammals of Borneo (such as orangutans, gibbons and elephants), but more of a focus on insects, bats and caves and dramatic scenery. I enjoyed the bat exodus again and was pleased to make some photographs of the birdwings.