The traditional art of the equatorial west African country of Gabon has fascinated the world. There has been particular emphasis on the products of the Fang in the north, the Kele-Tsogo groups in the northeast, the Mbede-Teke groups in the east and the Punu-Shira groups of the southern coast and adjacent inland areas. Sculptures and masks are very well known from these areas, but distinctive styles of decoration can also be found on objects of daily use such as knives, axes and neck collars.

I recently acquired a Fang axe from the north of the country (shown below), which matches illustrations from the mid 19th century and pieces collected during the second half of that century.

A 42 cm Fang axe with decorated blade,  light and very well balanced. The shape is distinctive, with handle flaring upwards to a forward pointing projection before tapering back to an angular termination. The thin iron axe blade displays elegant decoration, though less elaborate than some examples (Tessmann 1913).

The resonance of the object to me relates to my own experience of the country during the 1990s; the connection with the celebrated traditional art of the Fang; and the story of the early encounters between European visitors and the peoples of Gabon.

Here below is a view (looking eastward) showing Gabon in the context of its neighbouring countries and some of the places visited during those years (1994-1999). 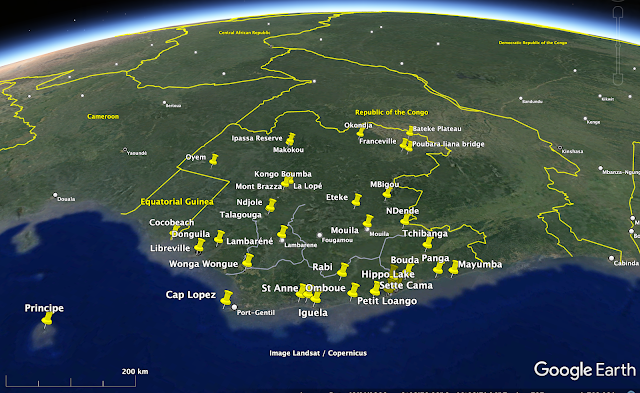 On the view above are two Portuguese names on the coast: Cap Lopez (reached by the Portuguese in 1473) and Setté Cama ("seven beds" or "seven graves"), a tiny village today, but, remarkably, shown on early world maps. The Portuguese in 1472 named the Komo estuary area in north Gabon "Gabão" after their impression that it had a shape like a hooded cloak.

19th century visitors to Gabon were fascinated by the Fang tribe, then in the process of migrating towards the coast. This was partly due to their energy and impressive physical appearance, but also associated with stories of cannibal practices.

Bowdich (1819) had heard accounts of them, referring to them as "Paämways." He mentions (page 429) that “... a considerable distance up the Ogooawai ... the nations on this route were said to be cannibals, the Paämways not so voraciously so as the others, because they cultivate a breed of large dogs for their eating ; this seems the favourite meat in most parts of Africa.” Perceptions of the geography of the interior at this time were vague in the extreme and based on hearsay, as illustrated by the map below (Bowdich 1819). Notice the strange, improbable (and incorrect) connection between the Ogooawai (or Oogooawai) upstream of C.Lopez and the Congo R. to the south. Various tribal names are noted, including the Asheera (Shira-Punu Group) far up the Ogoouawai and the Oorongoo (Myene Group) in the coastal area south of C.Lopez. The "Paämways" are not placed on this sketch map. 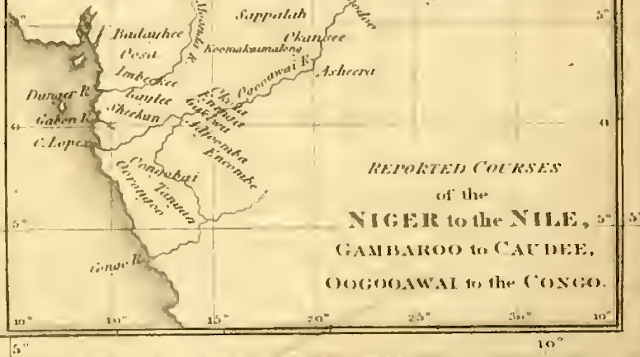 The missionary Dr. J. Leighton Wilson later encountered these "Pangwe" in person (Wilson 1843, pg 238), noting that "They had knives, spears, travelling bags, and other articles of curious and ingenious workmanship, specimens of which we procured for a very small quantity of beads. All of their implements are made of iron of their own, which is considered vastly superior to any brought to the country by trading vessels."

Paul Belloni Du Chaillu (1835-1903) greatly increased the public awareness of the area through his descriptions of journeys into the interior during 1856-59 (Du Chaillu 1861) and the subsequent visit of 1863-65 (Du Chaillu 1867). Bucher (1979) summarises plagiarisms, omissions and distortions in the account of Du Chaillu (1861), but amongst other things, in his statement that gorillas drum their chests (challenged at the time), he was correct (as I know from experience).  Du Chaillu illustrated a group of Fang weapons (see below), noting,

"Some of the Fans bore on their shoulders the terrible war-axe ... one blow of which quite suffices to split a human skull. Some of these axes, as well as their spears and other iron-work, were beautifully ornamented with scroll-work, and wrought in graceful lines and curves which spoke well for their artisans."

The "war-axe" (4) matches the form of my example shown above, though the ornament on the rear part of the blade is more lavish.

He also refers to a "very singular pointed axe," ( 1 in the illustration below) shaped very much like the head of the hornbills which are common in the Gabonese forests (in my experience), though he doesn't make this comparison. He dramatically claims that this weapon is "thrown from a distance, as American Indians are said to use the tomahawk... When thrown it strikes with the point down, and inflicts a terrible wound. They use it with great dexterity. The object aimed at with this axe is the head. The point penetrates to the brain, and kills the victim immediately ; and then the round edge of the axe is used to cut the head off, which is borne off by the victor as a trophy." De Brazza (1888 pg 8) presented an illustration of a Fang chief with one of these knives carried underarm. Bennett (1899) later described this weapon as a "sacrifice knife." 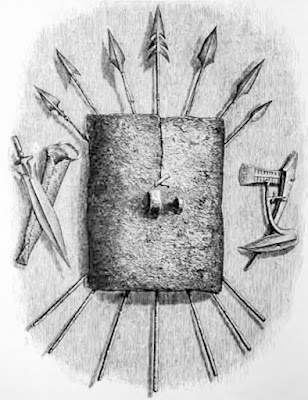 Richard Burton (1821-1890) made a brief visit in 1862 to the Fang village of Mayyàn (or Magyan according to Tessmann 1913). Referring to Du Chaillu, he noted (Burton 1876, pg 208), “The ‘terrible war-axe’ is the usual poor little tomahawk, more like a toy than a tool.” I'm guessing that Mayyàn/Magyan is the present day Mayangone, which appears to be in approximately the right place.

In defence of Du Chaillu's "terrible war-axe" description, a photograph of the Musée d'ethnographie de Neuchâtel display on Gabon in the 1930s shows that some of these axes could be very substantial, though which, if any, of these are war axes is not known. Illustrations by Fernand Grébert (Afrique Equatoriale Français. Ogooue. de 1913-1917, à 1932) also suggest that some of these Fang axes could be quite large (e.g. folio 93, 221, 258 and 274). Nonetheless, the smaller light axe could also be a serious weapon. 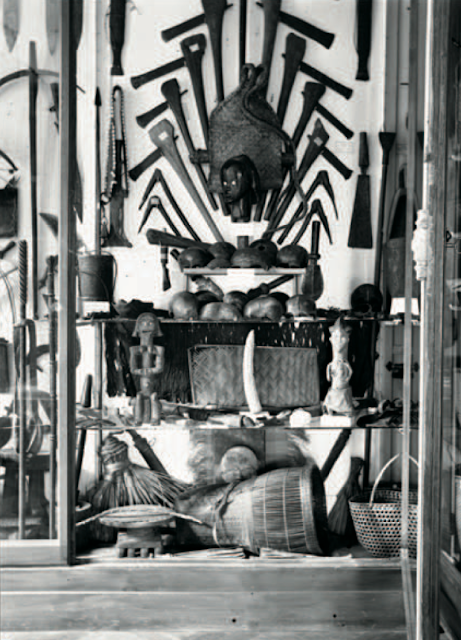 Musée d'ethnographie de Neuchâtel 1930s Gabon display showing some very large axes and the most celebrated of Fang ancestor heads. Amongst other objects a Fang crossbow is visible to the left, some fa swords, a reliquary box, and adzes below the large axes. 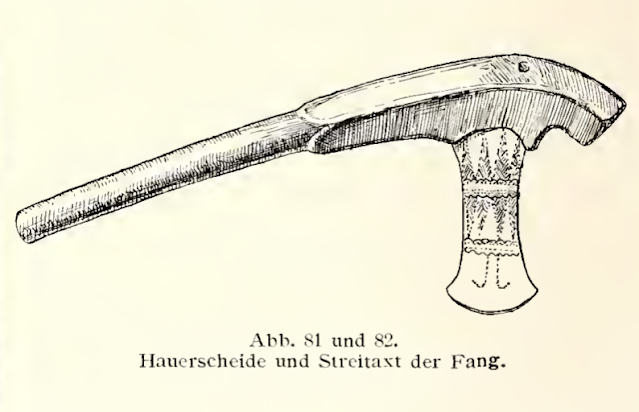 The thorough monograph by Tessmann (1913) contains numerous illustrations of the decorative designs on the knives and axe blades made by the Fang of Equatorial Guinea and southern Cameroon. Triangles and truncated ovoids with finely striated fills are common. A distinctive feature of the axe blades is a design in which lines extend towards the blade, symmetrically bending back at their terminations in a way suggestive of foliage. 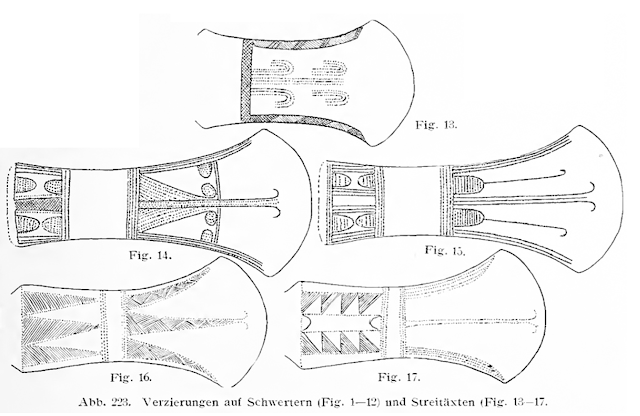 Decoration on a sample of Fang axes from Tessmann (1913). Tessmann labels them streitäxten, or war axes, as did du Chaillu (1861). A similar talent for endless decorative variations on a theme is seen on the blades of the fa swords.
My example shows a cross-hatched band, bounded by arcs, from which a cross hatched stem extends towards the blade, terminating in two curved branches which end in what appears to be foliage. 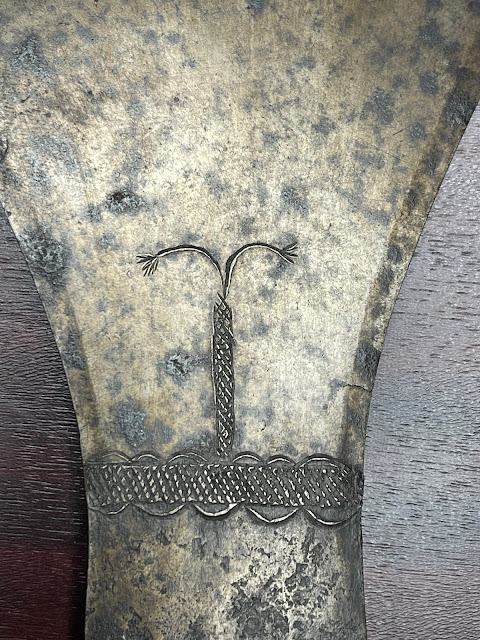 "Metallurgy among the Fang is limited to the working of iron. The native word for iron is Eki. The Fang among whom I lived did not possess the knowledge of smelting, but I was told that "other Fang far away in the bush, especially the Nqui dwarfs, dug the minkok eki (stones of iron) out of the earth, melted it and traded with the eki (iron)." [Tessmann 1913 illustrates Fang iron smelting in Equatorial Guinea.]

"Pieces of iron are forged into axe blades (ovon). The art of casting seems to be unknown. The bellows (nkum) used by Fang smiths are very ingenious. The feet are used to steady the bellows, whilst both hands work the goat skin covers and force air into the fire." [Du Chaillu 1861, pg 91 illustrates one such forge and Fernand Grébert later made a sketch of one of the last of these forges near Oyem (Folio 301).] 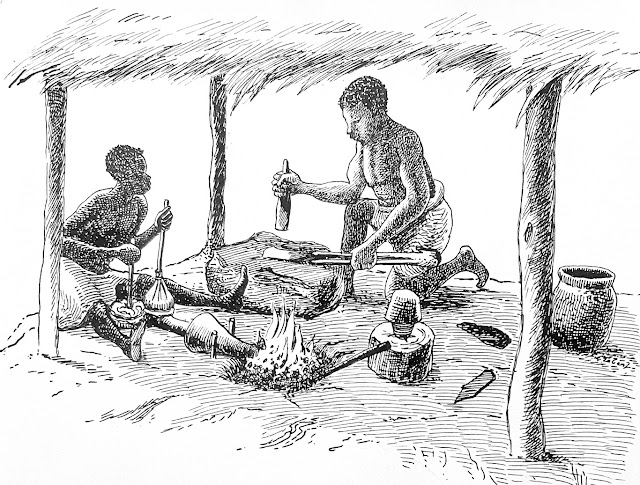 Sketch by Fernand Grébert of a Fang forge near Oyem (Folio 301). An axe head is taking shape.

To conclude, Fang metalwork is distinctive and elegant, displaying a great number of variations on a small  repertoire of themes. The axe described here is a pleasing example and the match to Du Chaillu's illustration of 1863 is satisfying. Du Chaillu may have been melodramatic in his description of the "terrible war-axe" and the relative lightness of my example gives some insight into Burton's “The ‘terrible war-axe’ is the usual poor little tomahawk, more like a toy than a tool.” Nonetheless, Du Chaillu may have seen more robust examples and some very substantial Fang axes are known. Whereas Fang ancestor sculptures and to a lesser extent their masks are widely celebrated, the decorative metalwork is also well worthy of appreciation.

Bowdich, Thomas Edward. 1819.  Mission from Cape Coast Castle to Ashantee, with a statistical account of that kingdom, and geographical notices of other parts of the interior of Africa, London: J. Murray