Mary Henrietta Kingsley (1897) recorded her experiences during a journey to Gabon in 1895, travelling as a trader and collecting freshwater fish for the British Museum. She admired the Fang peoples she met and travelled with (she refers to them as Fans), describing them as "full of fire, temper, intelligence and go."

She also admired the quality of their iron work (page 323). "The iron-work of the Fans deserves especial notice for its excellence. The anvil is a big piece of iron which is embedded firmly in the ground. ... The hammers are solid cones of iron, the upper part of the cones prolonged so as to give a good grip, and the blows are given directly downwards, like the blows of a pestle. The bellows are of the usual African type, cut out of one piece of solid but soft wood ; at the upper end of these bellows there are two chambers hollowed out in the wood and then covered with the skin of some animal, from which the hair has been removed." She had a go with the bellows, in typical Kingsley style, though not entirely successfully.

She makes two mentions of a distinctive "shovel-shaped" or "trowel-shaped" knife in common use among the tribes, as follows:

Page 248. "Every man among them - no women showed - was armed with a gun, and they loosened their shovel-shaped knives in their sheaths, as they came, evidently regarding a fight quite as imminent as we did." This was an encounter at a village at the northern end of Lake Ncovi (known today as Nkonié) in the early stages of her bold journey through the rainforest to the Rembwe on the south side of the Gabon estuary (see below). 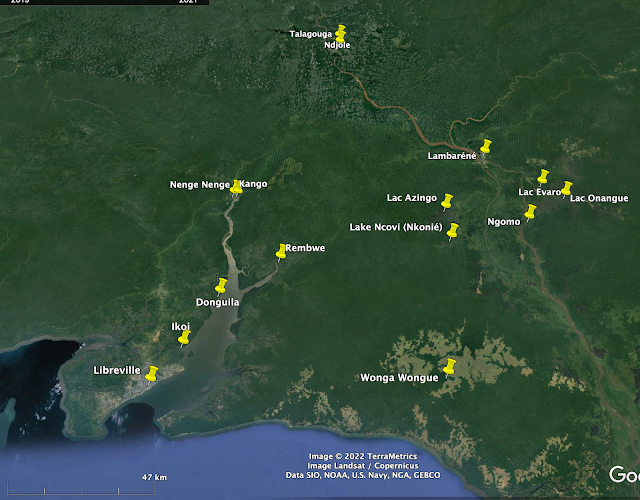 The area of Mary Kingsley's travels (East towards top of page)

On page 454 of Kingsley (1897), she notes the, "... sacrifices among the Fan are made with a very peculiar-shaped knife, a fine specimen of which I secured by the kindness of Captain Davies ; it is shaped like the head of a hornbill and is quite unlike the knives in common use among the tribes, which are either long, leaf-shaped blades sharpened along both edges, or broad, trowel-shaped, almost triangular daggers."

The leaf-shaped short swords mentioned are well known (they were illustrated by Du Chaillu 1861), but the broad knives very much less so. I have a single example of the type of knife she mentions (see below). The snuggly fitting triangular wooden sheath is decorated with the skin of a monitor lizard, Varanus niloticus (Dowell et al. 2016). The knife is 29.5 cm long and the sheath 20.3 cm long. The blade has a central spine, bevelled edges and striking broad form; it is 7.5 cm broad at its widest. A single brass ring adorns the wooden handle. A very similar example can be found in the British Museum collection, inventory number Af,+.1119.a, presented by Sir Augustus Wollaston Franks on 10th October 1879. It originated with the "German Exped. Gaboon," presumably that of Oskar Lenz in 1874 (Lenz 1874, 1875), and was previously in the Berlin Museum. The description given is, "Broad dagger, iron blade with rib and bevelled edges, wooden handle is of three globes : wooden sheath covered front with snakeskin." The German expedition was notable for its corrections (dated March 1875) of some highly erratic surveying of the course of the Ogooué River by the French expedition of 1874 (de Compiegne 1875, Marche 1878).

The Fang broad knife shown here provides an enjoyable connection to the adventurous journey of Mary Kingsley in 1895 and the earlier explorations of Oskar Lenz. I also have a mental picture of the lakes near this part of the Ogooué River dating from a visit there by boat in the 1990s (14th August 1994).