The Fang peoples of Gabon, Equatorial Guinea and southern Cameroon had developed a range of functional and beautiful tools and weapons, mainly made of iron, but also, as is the case with their crossbow, from wood.

Du Chaillu (1861) in his early account of the Fang peoples he met in Gabon wrote, "They have a great diversity of arms. Among the crowd today I saw men armed with cross-bows, from which are shot either iron-headed arrows, or the little, insignificant-looking but really most deadly, poison-tipped arrows. These are only slender, harmless reeds, a foot long, whose sharpened ends are dipped into a deadly vegetable poison which these people know how to make. The arrows are so light that they would blow away if simply laid in the groove of the bow. To prevent this, they use a kind of sticky gum, a lump of which is kept on the underside of the bow, and with which a small spot in the groove is lightly rubbed."

He described the crossbow as follows, "The handle of the bow is ingeniously split, and by a little peg, which acts as a trigger, the bow-string is disengaged, and, as the spring is very strong, sends the arrow to a great distance, and, light as it is, with great force. But the merest puncture kills inevitably. 'They are good marksmen with their bows, which require great strength to bend. They have to sit on their haunches, and apply both feet to the middle of the bow, while they pull with all their strength on the string to bend it back." 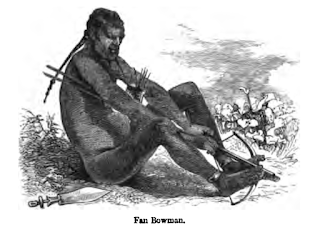 On the arrows, Du Chaillu wrote, "The larger arrows have an iron head, something like the sharp barbs of a harpoon. These are used for hunting wild beasts, and are about two feet long. But the more deadly weapon is the the little insignificant stick of bamboo, not more than twelve inches long, and simply sharpened at one end. This is the famed poison-arrow-a missile which bears death wherever it touches, if only it pricks a pin's-point of blood. The poison is made of the juices of a plant which was not shown me. They dip the sharp ends of the arrows several times in this sap, and let it get thoroughly dried into the wood. It gives the point a red colour. The arrows are very carefully kept in a little bag, made neatly of the skin of some wild animal. They are much dreaded among the tribes about here, as they can be thrown or projected with such power as to take effect at a distance of fifteen yards, and with such velocity that you cannot see them at all till they are spent. This I have often proved myself. There is no cur for a wound from one of these harmless-looking little sticks death follows in a very short time."

Burton 1876, pg 208 skeptically wrote, "the “Nayin” or cross-bow peculiar to this people, and probably a native invention, not borrowed, as might be supposed, from Europe, is carried only when hunting or fighting : a specimen was exhibited in London with the gorillas. The people are said sometimes to bend it with the foot or feet like the Tupi Guaranis, the Jivaros, and other South Americans. Suffice it to remark of this weapon, with which, by the by, I never saw a decent shot made, that the detente is simple and ingenious, and that the “ Ebe” or dwarf bolt is always poisoned with the boiled root of a wild shrub. It is believed that a graze is fatal, and that the death is exceedingly painful : I doubt both assertions."

Bennett (1899) stated that "The crossbow is used for shooting birds and small bush cats" and found that poison arrows were not used with the crossbow.

Tessmann (1913) provided descriptions and illustrations of crossbows, mechanism and quivers, and a photograph of the crossbow in use.  He emphasised that the crossbows were not weapons of war, but rather used in hunting. 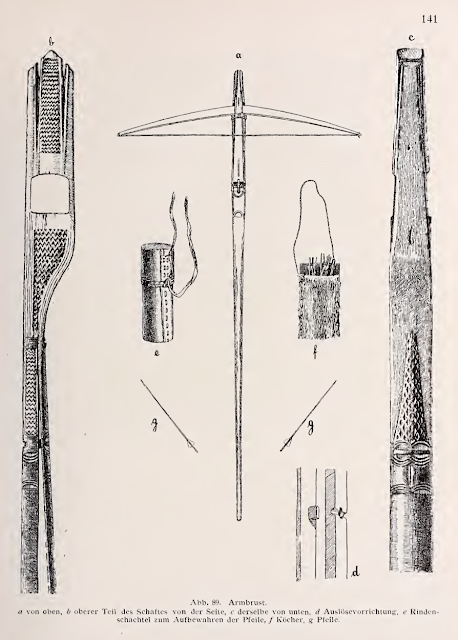 Fang crossbow in use, in Tessmann (1913) volume 1, page 142
Grébert (1922, pg 163) described a kind of baptism of the crossbow, in which two men make a 'medicine' out of herbs. One of them then holds the crossbow, the arrow rest pointing towards his mouth. The other takes a spoonful of the medicine, walks it along the support, solemnly naming the animals that the weapon must kill; he arrives at the rope, then at the bow, and at the man's mouth, into which he pours the medicine. As soon as the man has swallowed, he roars like a wounded wild beast; and the ceremony is repeated several times.
Grébert noted that the darts are thin, feathered with a piece of dry leaf, and often poisoned. He estimated range at 100 to 130 meters. 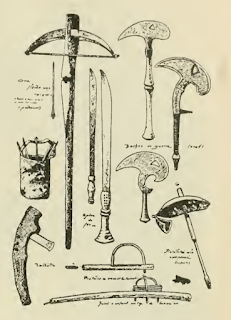 Illustration showing crossbow, quiver and arrow in Grébert, (1922).
I own one of these crossbows (not illustrated here) and an example of the type of tubular quiver shown in Tessmann (1913) complete with barbed arrows (darts) and wooden cylindrical container to hold the poison, shown below. 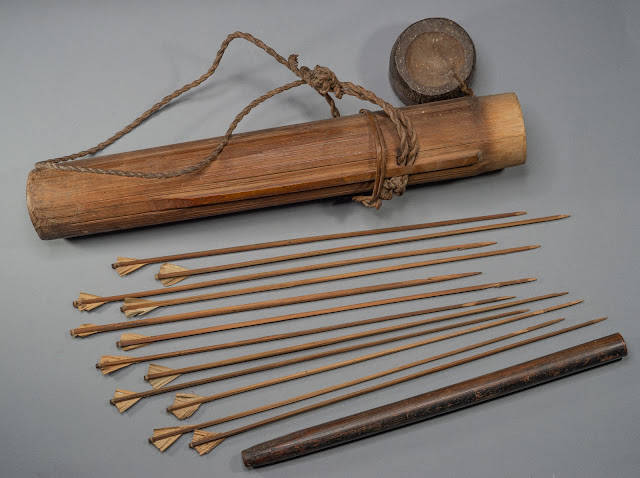 Quiver for poison arrows with tube to contain poison and a set of light arrows with flights made of leaves (RS.AF78). From the collection of a French colonial, details now lost.
The Fang crossbow is a distinctive and fascinating hunting weapon, as Burton suggested and Tessmann agreed, almost certainly an original invention with no relation to European crossbows. It forms part of the ingenious Fangtoolkit that so impressed European visitors from the first encounters (Bowdich 1819) onwards.